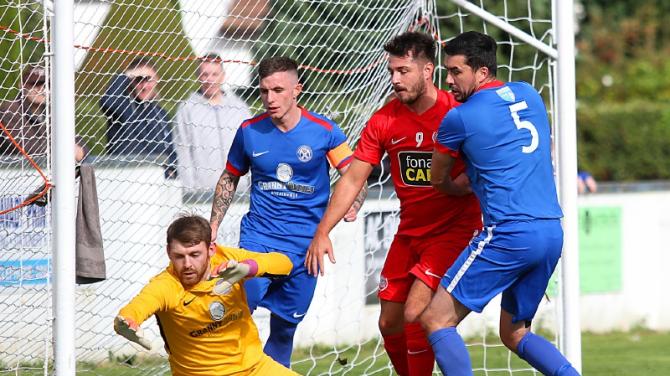 LIMAVADY United manager Sean Friars insists there will be better times ahead for the Roesiders after Saturday’s defeat against Dundela at the Showgrounds.

It was the home side who started the brighter and found themselves with chances to grab the advantage inside the opening 20 minutes.

Friars’ men were to rue their spurned oppurtunities as the visitors broke the deadlock shortly after the half-hour mark and added a second before the interval.

The United boss made no bones about his sides lack of quality in front of goal and insists that the scoreline would have been entirely different had they taken their chances early doors.

Speaking to the Chronicle Friars said.

“I am really disappointed after the level of performance we have been putting in over the last few weeks but that’s football.

“In the first 20 minutes we were very good and had our chances and missed two open nets which is quite frustrating because it is important that you take your chances when you’re on top.

“Dundela are a top side, they move the ball well and have quality in their team but we done our homework before the game and I felt we should have done much better.

“ I warned the boys that if we gave the ball away cheaply we’d be punished which was the case.

“I felt that if we had of got a goal early it would have rocked them and pulled them out of shape but that wasn’t the case.

Trailing by two goals at the break the Roesiders had an uphill task if they were to grab anything from the game. Friars demanded a response from his players and got exactly that when United pulled a goal back early in the second-half.

“We were not anywhere near good enough in the first-half and I got the boys in at half-time and had a real go at them,” he said.

“We came out fighting after the restart and we pressed and squeezed Dundela back and got our goal.

“The goal livened the game up a bit and I felt that we could have kicked on and turned the game around but that wasn’t the case which is disappointing given the fact I know how we can play.

“To a man, the boys were just flat and we had too many players who had an off day which isn’t what we wanted but sometimes that happens in football.

The Limavady United manager was full of praise for midfielder Hugh Carlin, who has recently returned from injury and grabbed the Roesiders’ only goal of the game against Dundela. The midfielder is a key man for Friars’ men and once again proved his worth last time out by hitting the net.

“Hugh (Carlin) came back last week and in hindsight it was maybe a week too early,” said Friars.

“He slotted into midfield on Saturday and he was excellent.

“It’s a massive boost for us because Hugh gives us a little bit extra in there and he’s worked hard to get back from injury so we hope he can stay fit now,” added the United manager.

Home form is often hailed as the key to success, however, Friars insists that this is not always the case.

“We have lost two and won one at home which is not ideal but I don’t feel that home form is vital in this league.

“We have been very good away from home which is pleasing.

“I think if you are playing in front of a big crowd at home it might add that little swing to a fixture but for us if we turn up and put in a good performance I am confident we are capable of beating anyone,” said Friars.

Next up for United is a trip to Lakeview Park as they face Loughgall. The fixture provides the perfect platform for Friars’ men to set the record straight and get back to winning ways, however the United boss is aware that it will be no easy feat.

“We’re away to Loughgall next week and it will be another tough game for us but at this level there are no easy games it’s about who wants it more.

“This season we have already noticed that anyone is capable of picking up a result and we have probably been at our best against the top sides in this division so we will go there prepared and hopefully we can get back to winning ways.

“People sometimes write us off but we know inside the dressing room that we are capable of winning against any side when we are all on form,” said Friars.