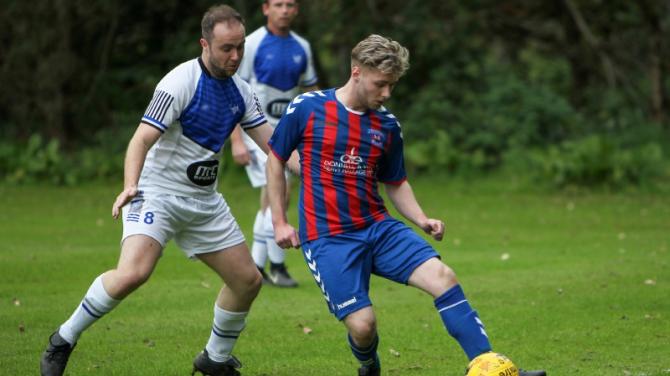 MOUNTJOY United came from behind to overcome Strule United in a fiercely-contested Fermanagh and Western Division One battle at Donnelly's Holm on Saturday.

Luke McGinn gave the hosts a one-goal lead just before the half-hour mark but their advantage lasted just five minutes, Ryan McFarland guiding the ball home to level the scores.

Gregory Dickson and Lee Frazer fired a quick-fire double for Mountjoy in the second-half as David Gilfillan's side claimed their first league win of the season.

“It was good to get the first league win,” said manager Gilfillan. “We had a tough run of opening fixtures against teams we weren’t expecting to get much out of, so there was no pressure on us.

“But we won last time out in the Junior Cup and we won on Saturday so we want to keep the winning form going.”

Gilfillan feels his Mountjoy side were on top for much of the game.

“Their goal came against the run of play. We were in control of possession, in the second-half their goalkeeper pulled off a couple of great saves and we hit the post. So it was pretty comfortable.”

What pleased Gilfillian most was the performance of some of his fringe players.

“We were missing up to five regular players on Saturday. We had to bring some guys up from the second team and boys who had been on the bench got their opportunity. They came into the side and now I have a tricky task in picking the team next week.

“Gregory Dixon was superb and Andrew Gilfillan did his job well. Jamie Douglas was excellent at the back, so I have to be pleased with the strength in depth we have.”

The visitors started the game brightly and could have been ahead when Andrew Gilfillan's shot from distance whizzed just wide.

Adrian O'Kane and McGinn created half-chances for the hosts, while Gilfillan was denied by Strule goalkeeper Barry Cunningham.

Midway through the first-half the hosts got the scoring underway as a long kick-out from Cunningham found McGinn on the right and he raced goalward before drilling home with a low shot from the edge of the box.

Mountjoy almost grabbed an immediate equaliser when Gilfillan rifled another shot from distance but though this effort was closer it failed to trouble the goalkeeper.

Three minutes later the visitors broke their deadlock when Stephen Montgomery's free-kick was bundled home by McFarland at the back post.

The remainder of the first-half was played at a fast tempo with both sides creating chances, Frazer going close for Mountjoy, Strule's Aaron McCrory testing visiting goalkeeper John Long.

In the second half Mountjoy began to find their groove - McFarland and Baxter both going close before Montgomery glanced his header inches wide.

And in the 65th minute the visitors took a deserved lead. Montgomery's floated free-kick fell kindly to Dickson, who made no mistake with a close-range finish.

Pushing for an equaliser Strule won a succession of corners, but Mountjoy's defence held firm.

The hosts continued to throw players forward in search of an equaliser but were left licking their wounds when Mountjoy launched a rapid counter-attack led and finished by Frazer who drove forward from deep before rounding the goalkeeper and tapping into an empty net to secure the victory.