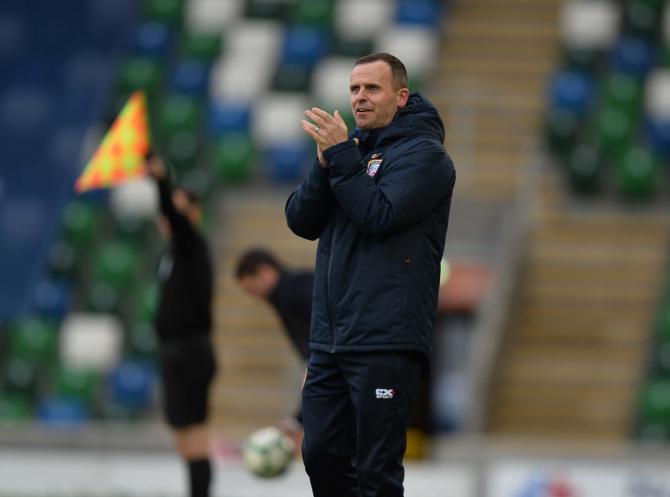 Coleraine manager Rodney McAree insists that his side have to be at their best if they are to register a win against Glenavon at Mourneview Park on Friday night.

The Bannsiders suffered a heavy defeat against Glenavon at The Showgrounds as Stephen Murray bagged a hat-trick which helped the Lurgan Blues secure an emphatic 4-1 win. The defeat in early October halted Coleraine's charge as the Stripes  had went 32 games unbeaten until that point.

“It’s another game on television and hopefully we perform better than we did against Newry the last time," McAree told Chronicle Sport.

"We know that we were well beaten at home against a very strong Glenavon side and I have no doubt that we need to be at our best if we want to get the three points," he added.

"Glenavon are a massive threat and they have started the season very well If you look at the game back in October you can see what kind of a threat they have.

"Coming off the back of last week's performance against Ards I am hopeful we can build on that and focus on the positives from the game," said the Coleraine boss.

Glenavon have hit an indifferent patch of form in recent weeks, having won just one game from their last six, despite being the early season pace setters in the Danske Bank Premiershp.  Regardless of the record, the Coleraine manager insists that it is important that his side take care of the task in hand.

"Every team can go through a rough patch but it is important for us to look after ourselves and approach the game the right way," said McAree.

He added: "Glenavon play with a lot of pace and energy and they have two front men in Andrew Mitchell and Stephen Murray who can do damage but we must make things difficult for them and keep things as tight as possible."

With the transfer rumour mill gathering pace, speculation over the future of winger Darren McCauley is a hot topic. The 27 year-old has developed into an instrumental part of Coleraine's success but is out of contract at the end of the season.

Derry City are believed to be targetting a move for the left sided midfielder however,  Coleraine manager Rodney McAree insists that he is "hopeful" McCauley will pen a new deal with the Bannsiders.

"We spoke to Darren again recently and there was an offer made to him," said McAree.

"I am hopeful that Darren will commit his future to Coleraine FC because he is a fantastic player and he has been great to deal with since I joined the club.

"He is well respected by everyone at Coleraine and I hope that we can keep a hold of him," he concluded.

Coleraine's trip to Mourneview Park is set to be televised, however, if you want to read all the action and reaction from the game, make sure and pick up the Chronicle.