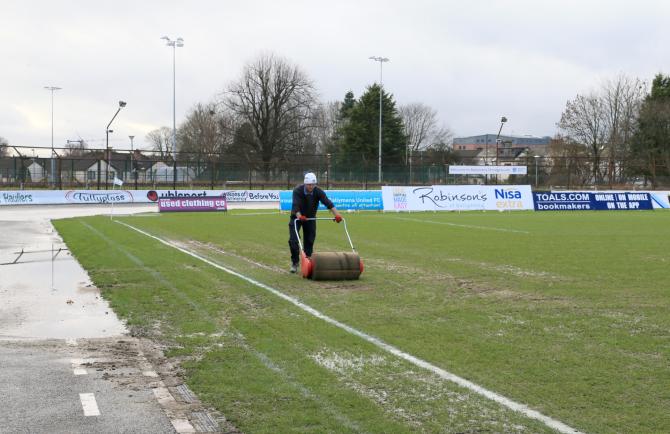 A number of games have postponed at the Ballymena Showgrounds this season.

A special meeting of Mid and East Antrim Borough Council has been held to address issues surrounding the main pitch at the Ballymena Showgrounds which has been the focus of much criticism this season.

Wednesday evening's meeting was called to discuss immediate, short-term and long-term plans to improve the playing surface amid growing criticism.

An investigation was previously launched by council to address ongoing issues with the playing surface.

A number of matches have been cancelled for a variety of reasons, including poor weather.

"The surface is, however, nowhere near the standard council or its partners expect," said a spokesperson for Mid and East Antrim Borough Council.

"The findings of council’s investigation were brought before Wednesday’s special meeting, at which elected members were updated on what issues had been identified and, more importantly, what council is doing to address the matter and ensure the pitch at the Showgrounds is among the best in Northern Ireland.

"Significant works on the pitch were completed in June 2018 and were carried out by an outside contractor to an excellent standard.

"Since then, council staff have closely followed the dedicated maintenance plan for the pitch that was developed by the consultant.

"Ballymena United, who were due to play on the pitch in mid-September, delayed their return to the Showgrounds until October in order to give the new surface the maximum time to settle. This was very much appreciated by council.

"The council investigation launched last week has identified the current issues as having resulted from the smearing of the grass combined with compaction of the surface. Smearing is when grass is uprooted and becomes embedded in soil on the top of a natural surface.

"The main reason for the current poor condition of the pitch is believed to be overplaying of the new surface combined with receding grass cover and wet weather.  The responsibility for the pitch lies solely with council, who manage bookings for the venue, and who are fully committed to restoring the pitch.

"In recent weeks, our staff have worked tirelessly to address the compaction and direct seeding has also taken place.

"In the coming weeks, planned steps to protect the surface include the use of a full pitch cover during inclement weather, and council is considering a range of options to boost the recovery of the pitch.  Council is also continuing to work closely with experts throughout the ongoing remedial works, as well as delivering an extensive end of season maintenance programme from May.

"The planned remedial works will fall within the initial costing for the overall development of the surface at Ballymena Showgrounds.

"The poor condition of the Showgrounds surface has been taken extremely seriously by council, with the Chief Executive working closely with council’s senior management to identify and deliver the necessary solutions as a priority.

"Council again wishes to apologise to Ballymena United, the club’s fans, our citizens, and the wider football family, and we thank them for their patience as we work hard to ensure we have a football venue to be proud of," added the spokesperson.