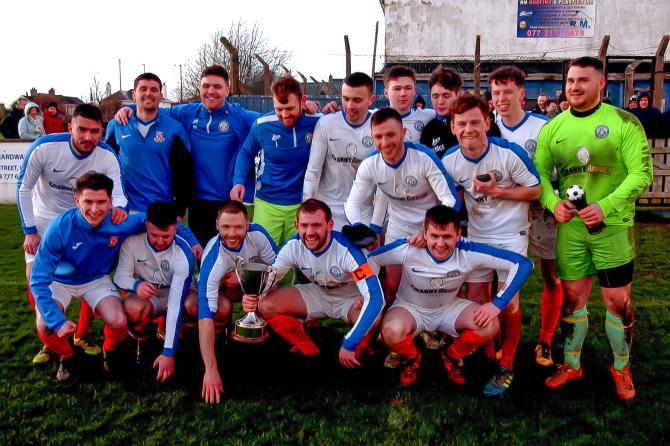 LIMAVADY United manager Sean Friars spoke of his delight after winning his first trophy in senior management as the Roesiders edged out Institute on penalties in the final of the Eventsec North-West Cup.

After a scoreless 120 minutes, the deciding penalty was hit by United ‘keeper Connor Brown who made no mistake from 12 yards.

Speaking to the Northern Constitution after the game, Friars was full of praise for how his players managed to secure the success at The Showgrounds.

“I’m obviously delighted with the success but I’m more pleased with the manner of our win,” he said.

“We had six players out through a variety of reasons, we had three 17-year-olds in the matchday panel and Institute fielded a strong team.

“Crusaders manager Stephen Baxter and Glenavon boss Gary Hamilton have both rightly praised Institute for their style of football this season, but I felt we restricted them to very little opportunities in front of goal.

“In fact, there weren’t a lot of chances throughout the game as we gave them no space and our defending was strong.

“It wasn’t a backs against the walls performance as we were very sharp on the break and had a few half chances ourselves.

“There was a feeling of self-pride afterwards as I’m a winner and always will be.

“I don’t play so all the credit has to go to the players as they are the ones who cross the white line.

“It’s a nice feeling to lift my first trophy in senior management but the players have to take the credit and they deserve the plaudits. I would be far happier with three points this weekend to help aid our fight against relegation.”

The boss was happy to see his defence register a clean sheet in the final and hopes this is a sign of things to come.

“It was massive to get a clean sheet,” he added.

“We have been asking the players to remain concentrated throughout 90 minutes and cut out individual errors, so hopefully this will provide them with a bit of confidence.

“If we had more clean sheets, then we wouldn’t be at the bottom of the table, so it’s up to us to get more of them before the end of the season.

“I am delighted for the boys as they needed that confidence boost.

“A few teams might not take the North-West Cup seriously, but it’s the biggest it has been as Ballinamallard United and other teams were involved.

“You want to win every competition you enter and even friendlies. It’s a good win for the boys as it’s been a tough season but it’s all about the league.

“If we bring the same attitude and desire to the way we played last weekend, then I’m confident we will pick up points but that has to happen now.”

United will have an opportunity to collect a valuable three points as they face Knockbreda this weekend - a match which Friars knows won’t be easy.

“Since the league has split I have full faith in my players that they can beat all the other teams in the bottom half,” he continued.

“Unfortunately that hasn’t happened yet but this is a huge game and it will be difficult like they all are in this league.

“They might be looking over their shoulder at us, Dergview and PSNI, so they know three points might guarantee their survival for next season.”

United will have fitness doubts ahead of their trip to Breda Park, but will be boosted by those who missed out against Institute.

“We had about three or four players who were cup tied against Stute, so they will be called back into the squad and that is important for us,” he concluded.

“We will have to check on Sean McCarron and Shane Boyle as they are both carrying knocks at present.

“We also won’t have Gareth McFadden available as he has a one-match suspension.”