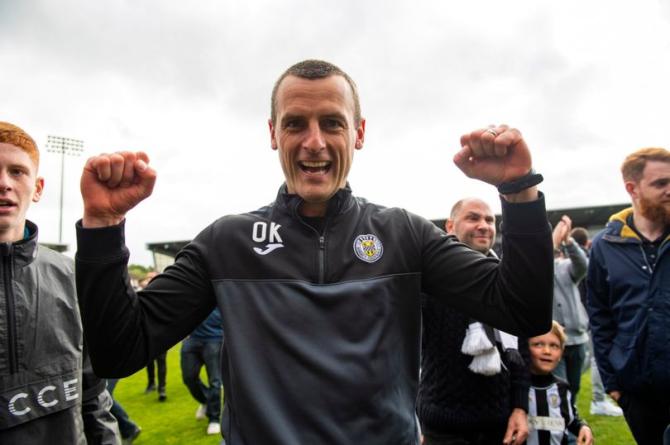 Kearney's charges held their nerve to win on penalties after the second leg of the relegation/promotion play-off had finished level 1-1.

Thursday's first leg at Tannadice had also finished in a draw, 0-0, meaning that extra-time and penalties was required to decide a winner.

In the end, it was the Paisley side who emerged victorious, 2-0 on spot-kicks, after their visitors failed to score from the spot.

The victory represents a huge personal achievement for the Ballymoney man who succeeded Alan Stubbs just weeks into the season.

He moved quickly to offload a number of players in his first few months and proved equally decisive when it came to recruiting new players in the January transfer window.

One of those he enlisted was a player he knows well, former Coleraine midfielder Brad Lyons, who joined on loan from Blackburn Rovers.

Together, the management and playing squad oversaw an upturn in fortunes which saw Saint Mirren finish the season strongly, the players taking that form into the two-legged play-off against Dundee Utd.

The end result is that The Buddies will be playing their football in the top league for a second successive season in 2019-20.

It also seems increasingly likely that Oran Kearney will remain in Scotland.

Reports linking the former Cross & Passion schoolteacher with a return to Ballycastle Road has been growing in recent weeks.

Claims that the 40-year-old was finding it hard to juggle football commitments in Scotland with family life - wife Lauren and the couple's two young children still live in Northern Ireland - are believed to be behind the speculation.

However, speaking to reporters following Sunday's dramatic win, Oran hinted that he was going nowhere.

"Speculation is always going to be there but when I made the step to want to do this I wanted to give it my all and that’s what I intend to do," he said.

That could prove to be bad news for the Bannsiders who endured a disappointing season last year and dispensed with the services of manager Rodney McAree a number of weeks ago.

For more on this story, pick up a copy of The Chronicle on Tuesday morning.