Bertie Peacocks off to a winning start 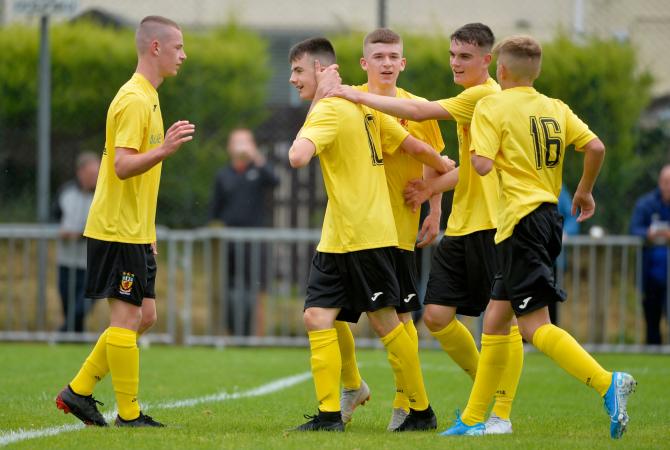 BERTIE Peacocks have made a winning start to this year's STATSport SuperCup NI tournament after a hard fought 2-1 win against Glentoran at Anderson Park in the Minor Section.

Elsewhere, there were wins for Glasgow giants Rangers (Junior Section) and Celtic (Premier Section), with Manchester United held to a 2-2 draw against Strikers.

Day One also saw a mixed bag of results for the County squads, but County Antrim continue to flourish with wins in the Junior and Premier sections.

In Group A, Linfield made a winning start after easing past Portadown by two goals to nil at The Warren, Portstewart, with Finn Harps successful in the other game as they edged out Ballyclare Colts by a single goal at The University.

In Group B, Dungannon Youth celebrated a 2-0 win over Ballinamallard at The University, with Chinese side Beijing BFA also proving too strong for Warrenpoint as they ran out 3-0 victors.

Coleraine would make a losing start in Group C as they were beaten 3-1 by Global Premier Soccer, but there would be joy for Bertie Peacocks as they were successful against Glentoran.

Ballymena United would hold the derby bragging rights in Group D as they swept aside Larne by four goals to nil. Last year's champions Greenisland would lose their opening game 2-1 to Glenavon at Riada Stadium.

In the Junior Section, County Fermanagh will be hoping for an improvement after an opening 5-0 defeat to English club Charlton Athletic, but there would be joy for County Antrim (5-1 win vs Dundalk SL), County Tyrone (2-0 win vs Brackneil Town) and County Londonderry (1-1 vs Plymouth Argyle).

English giants Arsenal would open their account with a 2-1 win against Global Premier Soccer, Man United would be held to a 2-2 draw against Strikers, with Leeds United and Dundee United playing out a scoreless draw.

In Group A, Japanese first time entrants Riseisha made an instant impact as they sealed a 5-0 win over Mexican newcomers Atlante. Elsewhere, County Down drew 0-0 with 2017 winners Right to Dream at The University.

Group D were graced by the debut of Spanish giants Valencia but they found County Fermanagh a tough nut to crack as the two sides played out a 2-2 draw. The other match was a goal fest as Strikers edged out County Armagh (3-2) at Castlerock.

In Group E, Newcastle United bagged in five goals in a win against County Londonderry, with Canadian outfit FC Edmonton also licking their wounds after a 3-1 loss to Hull City.

Supporters were treated to an entertaining clash at the Ballymena Showgrounds as the Sky Blues were beaten 4-3 by Manchester United under-23's.

The Danske Bank Premiership side took the lead on 16 minutes as Cathair Friel headed home from Ross Lavery's corner-kick. However, two goals in five minutes put United in front as Dyllan Levitt netted from the spot, before D'mami Mellor fired home.

Just after hour mark, United would add a third from the boot of Aidan Barlow, but this sparked the hosts into life and they reduced the deficit from the penalty spot as Andy McGrory tucked home.

The goals just kept on arriving and there was a fourth for the Red Devils as Arnau Puigmal netted from a rebound, with Ryan Harpur's late strike for Ballymena in vain.