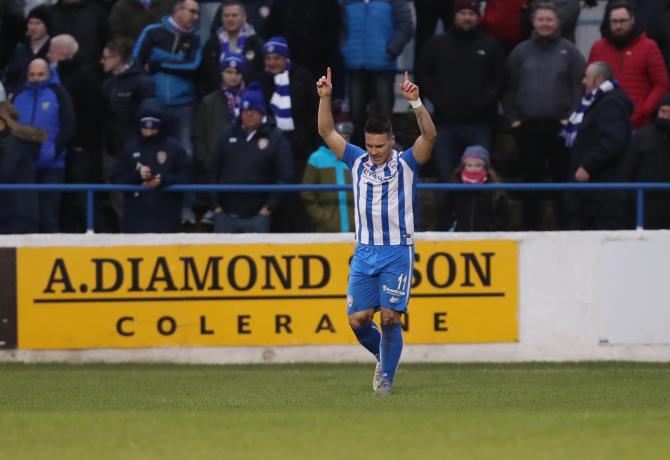 Josh Carson celebrates after opening the scoring in the Boxing Day win over Ballymena.

COLERAINE secured a first win in five meetings over Ballymena in front of a packed house at The Showgrounds on Boxing Day afternoon.

First half goals from Josh Carson and Jamie Glackin secured what was in the end a comfortable victory over their derby rivals.

Ballymena forced two great saves out of Coleraine keeper Chris Johns over the 90 minutes but the home side never looked in danger of conceding.

Johns' opposite number, Jordan Williamson, received his marching orders midway through the second half after handling the ball outside his penalty area.

And, despite what United manager David Jeffrey had to say on the matter afterwards, the sending-off had negligible impact on the final outcome.

The hosts were already two goals to the good at that stage and were in a dominant position in the game.

With a numerical advantage they were able to see the game out, the absence of Cathair Friel a blow to the visitors' hopes of rescuing something from the game.

So, then, a first derby win for Oran Kearney's men since a 1-0 victory at Ballycastle Road in April 2018 and a well deserved one at that.

The result should give the Bannsiders plenty of confidence going into Saturday's top of the table clash at home to Linfield.

The Blues went down 3-0 to bitter rivals Glentoran in their Boxing Day derby and manager David Healy will be looking an immediate response from his players.

However, if Coleraine can reproduce the same level of performance as they did on Thursday then Linfield will struggle to record a first win over Coleraine this season.

The teams have met three times already - twice in the league and once in the Bet McLean League Cup - with Coleraine victorious in all three.

A fourth successive win would represent a profitable festive period for the Bannsiders and set up an exciting New Year.

For all the latest football news, check out Tuesday's Chronicle newspaper.