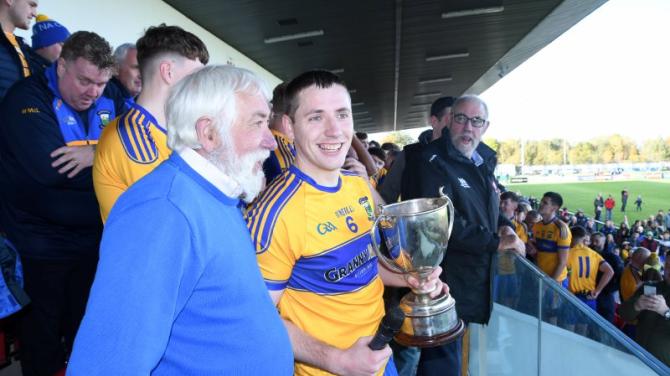 THIS game went as expected, Limavady had too much youth and pace in their team for a slow moving and ultra-experienced Moneymore who offered little resistance particularly in the second half.

In addition to scoring twenty times, the Wolfhounds shot thirteen wides in as easy a victory as they have had all season.

They have completed the clean sweep of all junior trophies just as Moneymore did four years ago and next up is a meeting most likely at Celtic Park against the Down junior winners in two weeks time.

In front of a crowd in excess of three thousand the Wolfhounds themselves had massive support and every score was cheered to the echo.

Overall it was a dull game with Moneymore scoring an early penalty but gradually the much sharper winners reeled them in and at times were scoring at will.

Moneymore’s attempt to play defensive football simply did not work.

With Paudie O’Neill playing in a surprisingly deep position it left them light in attack.

Limavady had the pace to get behind the reinforced loser’s defence who could not get a handle on the lively Ruairi Hassan.

He had a field day as he exploited the space left on the wings.

With Dean McInnis suffering a nasty ankle injury in training during the week, Limavady were forced to call up John Deighan to wear the number 16 jersey.

John had been semi retired for a number of years.

The Wolfhounds keeper gave away an early penalty but was not as unlucky as his opposite number.

Stephen Barker had come out of retirement to fill the number one jersey for Moneymore and his experience and accurate kicking out was invaluable.

Just twelve minutes into the game Barker injured a leg and had to retire.

He was replaced by Liam McInnis who made several fine saves despite normally being an outfield player.

When county PRO’s go to the bother of putting a match programme together is annoying and shows little regard for spectators and the press when teams turn out in different numbers from the programme.

Limavady were guilty in this regard as several of their players disregard the programme numbers.

Ruairi O’Kane who was a late change should have been wearing 23 played in the number 10 jersey which was confusing for those present.

Moneymore were off the mark in the first minute when Callan Bloomer converted a free.

A foul on Callum Brown allowed man of the match Ruairi Hassan to level the game three minutes later.

Callan Bloomer shot straight and low to the net for a 1-2 to 0-1 lead.

At the other end the Moneymore goalie Stephen Barker limped off.

After he had shot a third wide Ruairi Hassan began to torture his marker Rory Young.

He finished off a fine move with a point to add to Cormac Quigley’s score a minute earlier.

In the 16th minute Cormac Quigey found himself in front of the posts with only the goalie to beat but he blasted over the bar to cut the Moneymore lead to a point.

After Stephen Scullion picked up a yellow card for a foul on Richard King the busy Hassan tapped over to level the game.

Ten minutes from the interval the inevitable goal came when Ruairi O’Kane supplied the pass to Ruairi Hassan and he blazed the ball high to the net and from there on the final outcome was inevitable.

While Ruairi Hassan was piling up the scores he was also clocking up the wides and he hit his fourth in the 21st minute.

Limavady hit back only to see shots come off a post and the crossbar.

Coming up to half time Richard King and Eugene O’Kane hit quick points from play for a comfortable 1-7 to 1-3 interval lead.

As they did in the first half Moneymore got the opening score of the second and that was a fine effort from Callan Bloomer.

Limavady always had the capacity to respond and in quick succession Ruairi O’Kane from a rebound after Cormac Quigley had hit a post and a brilliant effort from Ruairi Hassan left Moneymore chasing a five point deficit.

Bloomer, the loser’s best player fired over a good score but the pace and fitness of Limavady was really telling at this stage.

Sub keeper McInnis made a great save from Cormac Quigley and Aodhan Conway a brave block on the follow up.

The ball then fell to Oisin Hassan and he popped it over the bar.

The game was fragmenting as Moneymore gave away too many frees and in the 43rd minute Richard King converted one for a 1-12 to 1-5 lead.

At the three quarter stage Oran Hartin made a fine save from Eoghan Conway who had moved from full back to full forward.

Two frees from Richard King opened up a ten point gap before Moneymore sparked to life with Bloomer and Conway setting up Conan McAleese for a well finished goal.

Limavady hit back immediately with classy point from the hard working Sheagh McLaughlin.

Conan McAleese pointed at the other end but the Wolfhounds still held an eight point lead with time ticking away.

Moneymore sub Paul Devlin was just on the field for two minutes when he got a red card.

Cormac Quigley pointed as the game went into added time and Moneymore’s woes continued when another sub Christopher Marshall got sent off this time on a black card.

Conor Forrest who had come off the bench finished the Limavady scoring with a point.

Overall it was a good team performance by the winners capably led by Captain Conor Boyd who had an excellent game at centre half back.

Limavady also won the midfield battle where one of Moneymore’s top men Christy Young never got to grips with Callum Brown who was always a handful.

Sheagh McLaughlin got through a lot of work alongside Brown.

The Moneymore defence never could get to grips with the speedy winners attack despite the efforts of Conway and Scullion up the centre.

Young and Marshall never got going at midfield after the opening fifteen minutes. Had Callan Bloomer and Conan McAleese got a better supply up front they could have pushed Limavady closer.