Dominant Dunloy book their place in U21 championship final 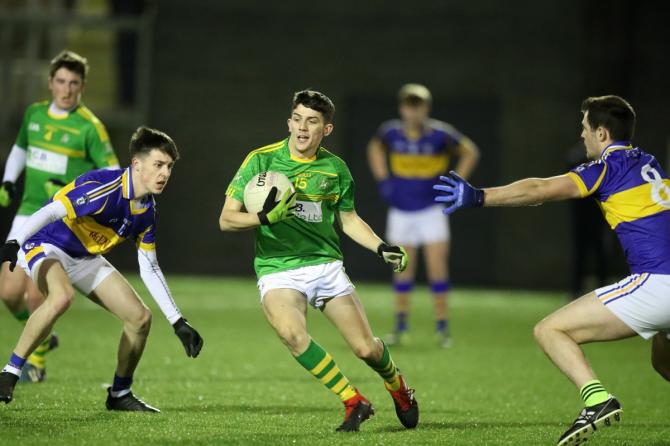 Dunloy Chulainn's have booked their place in the Under 21 championship final after an emphatic victory over west Belfast club O'Donovan Rossa.

It was an afternoon stroll for the lads from Dunloy. It may well have been an Under 21 football championship semi final played in Belfast but there was simply no way the North Antrim men were going to be halted as they continued their unrelenting journey through this event.

In the end, Dunloy were thirteen points better than the opposition and it could have been even greater from these graduates of the very successful minor teams of recent times.

After a tense and tentative opening, they built a seven point lead by the interval while second half goals from Keelan Molloy and Deáglán Smith ensured a healthy victory for the red hot favourites.

Rossa started the semi final well with Eoghan McMenamin and Darren Grego lively in attack and Michael McGreevey busy at centre half but a scoring burst of four points in barely two minutes mid-way through the first half put the Cuchullains in control with Eoghan McGrath, Molloy and Deáglán Smith all catching the eye in the opening thirty minutes.

Rossa were more competitive after the restart and looked to pressurise a Dunloy defence who strolled  through the first half but the wind was knocked out of their sails  with Molloy’s forty fifth minute goal while Deáglán Smith’s last minute effort was the icing on the cake.

Dunloy opened the scoring in the second minute with Seaan Elliott firing over for his first of his three points. Eoghan McMenamin replied instantly for Rossa but the Cuchullains looked to be more fluent in their play and were finding holes in the Rossa defence at will.

A series of wides threatened to hurt any momentum they may have built but  points from Molloy and Eoghan McGrath gave them  a two point advantage inside the opening ten minutes.

Battling Rossa were back on terms by the seventeenth minute with McMenamin and Cormac Murphy splitting the uprights.

Four points in a four minute spell saw Dunloy very much back in control as their tactics of building from the back began to pay dividends. Deáglán Smith, two from Eoghan McGrath and the fourth from Molloy saw them edge ahead.

From here to the break it was all Dunloy, their slick fact moving attack causing all sorts of problems and they increased their lead to seven when Conal Cunning, Deaghlan, and Seaan Elliott all finding the target.

It must have taken some motivation to get Rossa up and running again but, after the break they looked a rejuvenated side, and despite falling further back to another Elliott point after just five minutes, they were at last beginning to make their presence felt.

A free from Conall McDonnell gave them their first score in twenty two minutes and while Deáglán Smith landed a point from distance with the next attack, Rossa appeared to still have something left in the tank.

Two points from McMenamin and McDonnell, the latters  landed at the end of the third quarter proved their seventh and final score allowing Dunloy to continue their swagger once again.

Their  first  goal came from a counter and while hand bags were being thrown at one end of the pitch, Keelan Molloy went on a marauding run down the Rossa left leaving a trail of defenders in his wake before cutting inside and finishing smartly despite the best efforts of Michael Byrne in the Rossa goals.

Molloy took his tally to a goal and three for the match from a fifty fourth minute free and while Rossa began to have more possession as they tried to unlock a tight Dunloy defence, the Cuchullains remained resolute with Conor Kinsella and Aaron Crawford excelling as the match progressed.

Their second goal came in the last minute of ordinary time when Deaghlan Smith delivered to  the bottom corner of the net in style to complete what can only be described as a thirteen point thumping.
Only St Brigids now lie in their way.