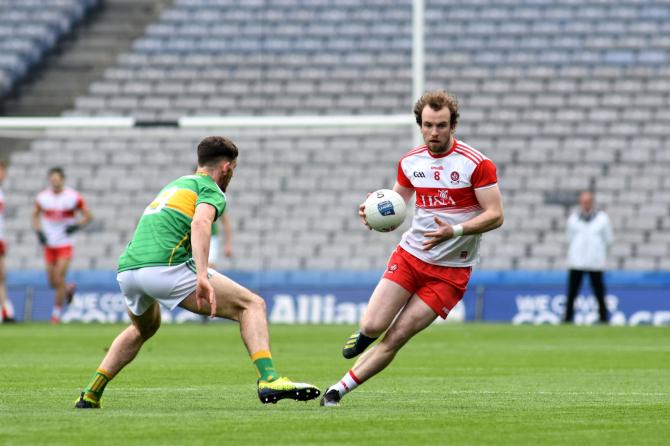 Slaughtneil’s Padraig Cassidy, a contender for the ‘man of the match’ award in Derry’s National League Division Four final win over Leitrim at the weekend.

DERRY did not have things their own way before clinching the Division Four final in a highly entertaining game at Croke Park on Saturday afternoon.

It was an eighth straight victory but, as manager Damian McErlain alluded to, there is a lot of work to be done before the championship game against Tyrone.

Derry were a bit fortunate to be in front at half-time as the wind assisted Leitrim kicked  eight wides. Some of them looked eminently scorable but fortunately for Derry the Westerners were hasty in their shooting.

The teams will be meeting again next year in Division Three.

One of the reasons why Derry suffered back to back relegations can be put down to the absence of the Slaughtneil players who were club-tied when their team won three of the last four Ulster Championships.

With seven on board at Croke Park it was easy to see the difference they make to a Derry team. Captain Chrissy McKaigue was excellent at centre half, kicking two points in the process. Behind him, Brendan Rogers was rock solid after a shaky start.

While Shane McGuigan, who kicked six points, was awarded the TG4 Player of the Game, many thought it should have went to Padraig Cassidy. ‘Tad,’ as he is popularly known, covered every part of Croke Park. His powerful running and generally clever distribution played a big part in the victory.

Goalie Thomas Mallon was superb with his kicking out resulting in him finding a team mate every time.

Michael McEvoy was solid in the half back line and Enda Lynn led the attack well. His pace caused big problems for the Leitrim defence. Still, it was far from a perfect performance from Derry. Their passing into the full forward line was very poor in the first half but then they were playing into a stiffl breeze in that period.

They were fortunate in that Leitrim kicked eight wides in the opening 35 minutes.

That said, Derry never panicked at any stage and at no point did they look like losing the game. They look to have problems at midfield but the absence of multi talented Ciaran McFaul through injury would have made a difference. In the end, the greater pace of Derry went a long way to securing the victory.

It was real end-to-end stuff within the opening five minutes with Leitrim getting up and running after just 53 seconds courtesy of Dean McGovern to huge roars from the crowd.

A Conor Doherty score from the kick-out ensured a quick response from Derry before an exchange of points between Shane Moran and Enda Lynn and a curling effort from Ryan Bell edged Derry ahead 0-3 to 0-2 inside the opening five minutes.

Leitrim’s forwards did extremely well in the opening half, finding plenty of space for themselves ahead of their defensive markers and racing onto the quick ball from s strong midfield.

Frees from Leitrim forwards Evan Sweeney, Ryan O’Rourke and Domhnaill Flynn gave Terry Hyland’s side the response they needed after a succession of bad wides and inched them into the lead by 0-5 to 0-3 entering the 15th minute.