Limavady mum on a mission for mental health 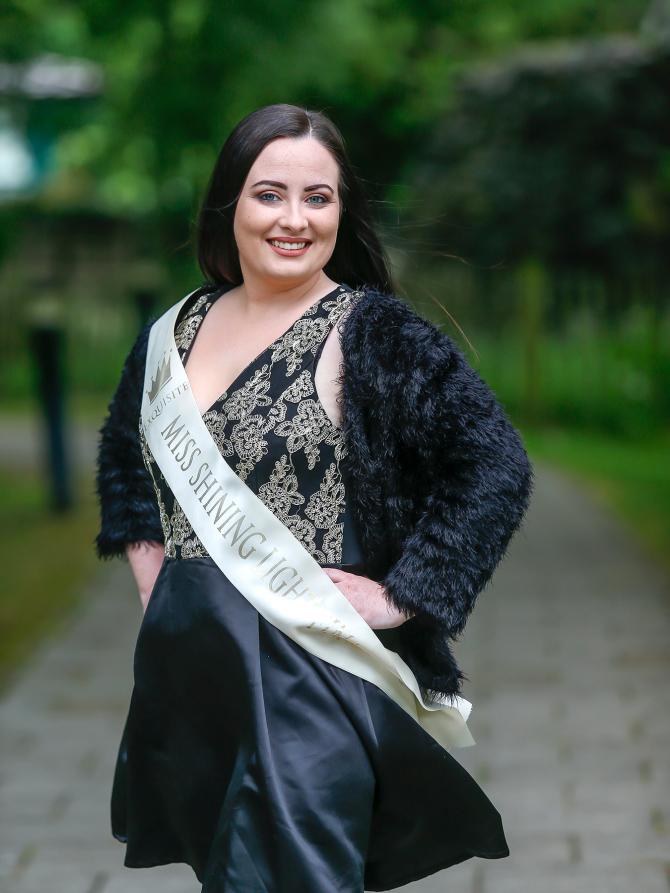 MENTAL health issues can be difficult to cope with but they can also be made worse by having to deal with the stigma that comes along with them.
This September, a determined Limavady mum of two, is set to break this stigma by shining a light on mental health awareness.
Originally from Tamnaherin, Patricia Mullin, 28, will take to the stage in September as a contestant for the Miss Shining Light competition which aims to raise awareness and much needed funds for mental health.
Founded by Jennifer Taylor and Emma Brolly, 'Miss Shining Light' is an inclusive charity pageant which supports Me4Mental, and has no height, weight, health or age restrictions including any conditions that have changed your life.
According to Patricia, she believes there is a 'massive need' in the community for events such as the charity pageant which aim to address the issues that people are too frightened to reveal.
She explained: “In the past I have waited months to speak to someone, and whenever your in a bad way, being told you have to wait a few weeks, feels like a few years - I just had to wing it or beg family to stay with me.
“The two girls who have set it up are amazing.
“Their hearts are in it and they are always begging for everyone to help in the community because, at the end of the day, if you only help one person then it was still worth it.”
For Limavady mum Patricia, who has two sons, Jake, 9, and Ethan, 3, her mental health began to deteriorate following the birth of her first child.
Patricia explained: “I began to struggle with anxiety, panic attacks and OCD.
“I was also on and off medication which I must admit was a big help for me.
“I used to be embarrassed to tell people this but now I just tell everyone because it's nothing to be ashamed of.
“I feel like the pageant has given me a bit of power and it has given me strength to stand up and tell everyone what I have been going through for the last nine years.”
The Miss Shining Light pageant includes six categories and consists of four rounds.
Each contestant must compose a two minute video on what mental health means to them which will be played to the judges at the final.
Patricia explained: “Those two words, mental health, carry a promise that someday I will have mental health not a mental illness.
“In terms of everyday living, having a mental illness also affects me physically as there are days where I physically can not get out of bed.
“Anxiety eats at you, and I can totally relate with other people who are going through a hard time.
“At times I felt I wasn't worth anything or sometimes I thought life itself wasn't worth living, the only thing I ever had to hold on was my children.
“My children still know I'm myself, but if we could see the world as children, we would see it so much better because children won't judge, they accept people at face value.”
So far, Patricia has raised a total of £795 for Me4Mental after hosting a sponsored walk at the Roe Valley Country Park in June.
Patricia continued: “The support is amazing.
“At this stage now people are still crying out for help so I am on a mission to show people I live like this but also to show that I'm not any different as a person.
On July 20, Patricia has organised a jiving/dancing competition with all proceeds going to Me4Mental charity.
The event will be hosted by Jive NI at the Bushtown, Coleraine with music kindly donated by Chris Madden and Band.
Doors will open at 8pm and tickets are £6 each or 2 for £10.
You can pay at the door or you can get in touch with Patricia on Facebook to purchase a ticket.
Regarding the upcoming charity pageant, Patricia admitted she is looking forward to taking part in a competition that supports such a worthy cause.
“I am feeling apprehensive but also very excited and hopeful this will make a change.
“I dont think anxiety will ever go away but I do believe acceptance is key.
“I have found over the last nine years, the harder I fought, the worse it became and the more the anxiety consumed me.
“I still have mental health issues today but they live alongside me, not inside me and I have learned skills to manage a bit better.
“However, there is no quick fix, you just learn to accept it and live with it.”
The Miss Shining Light Pageant will take place at the Waterfoot Hotel, Derry on September 14.