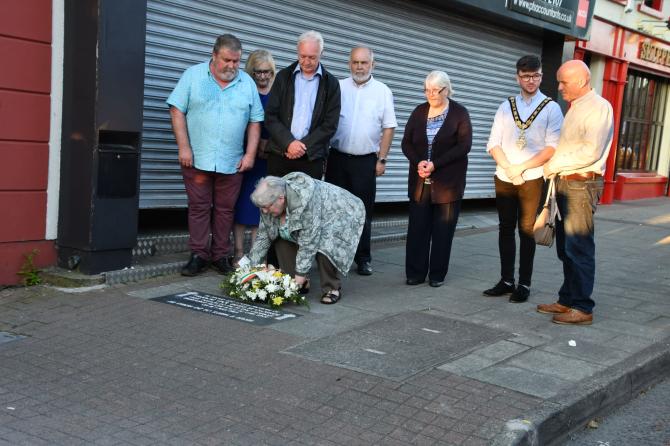 FIFTY years on from his death, the first victim of the Troubles has been remembered in Dungiven, last week.
Francis ‘Pól Beag’ McCloskey died a day after he was caught up in an RUC baton charge on July 13 1969 in the town.
The 66-year-old retired farmer, who lived with his unmarried sister on the outskirts of the mountain town, was taken to Altnagelvin Hospital in Derry with serious head injuries but did not survive.
Hundreds of people turned out last week to mark the anniversary of his death.
The crowd, which included former friends and neighbours, made its way from his old home at Benedy to a monument where a wreath was laid, a second tribute was placed at his graveside
A presentation on his life took place followed by a discussion on the civil rights movement and a candle-lit procession to a memorial stone dedicated to Mr McCloskey.
Although some consider the first of more than 3,500 killings of what became known as ‘the Troubles’ to be the UVF murder of John Scullion in west Belfast in 1966, Mr McCloskey was the first victim of the violence that erupted across the north in 1969.
Speaking after events to mark the 50th Anniversary of the death of Francis 'Pól Beag' McCloskey, Sinn Féin MLA Caoimhe Archibald said: “On Sunday many people came together at events to remember Francis 'Pól Beag' McCloskey who died following injuries inflicted during an RUC baton charge on 13th July 1969.
“A number of events took place including wreath laying ceremonies in the Benedy and Dungiven, a panel discussion on “Civil Rights: Then and Now” and a candlelit vigil at the spot where he was beaten.
“To date there has not been a proper investigation into his death.
“Sinn Féin will continue to support the campaign for the truth of what happened that night and to support Francie’s family who have been denied the truth to date.”