Leim An Mhadaidh is ‘key’ to new Irish Culture Centre 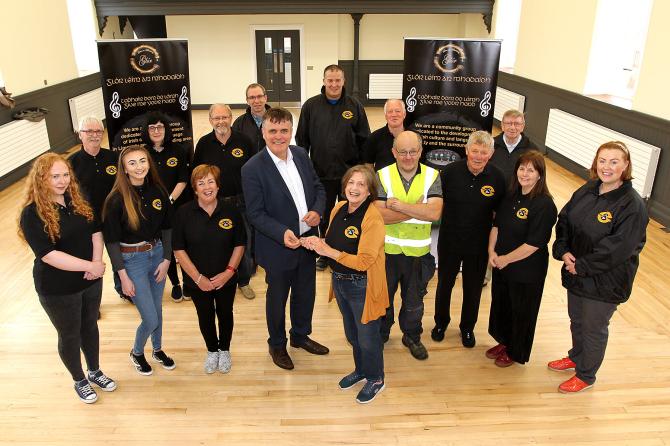 CULTÚRLANN Leim an Mhadaidh is set to for a big launch night on Friday September 6 with a night of music and entertainment to mark the opening of the new Limavady Cultural Centre.
The land the hall is on was acquired in 1887 and the hall opened in 1907.
The current committee purchased the hall in 2014 and funding sought for the refurbishment.
The hall retains strong links to the past through the retention of many of the features, and although not quite completed yet in terms of painting and decorating, plans are well underway for the first musical performance in September which will be part of the Eddie Butcher Festival.
There will be a concert of singing and music followed by an open session to be named 'Jimmy's Session' in memory of the late local musician, Jimmy O'Hara.
In attendance there will be musicians and singer from across Ulster. Ciaran O'Kane from Cushendun. Dábidh-Anndra Stiúbharid from Cookstown and Teenager Pearse Larkin from Crossmaglen.
The newly refurbished location on Irish Green Street has a history of its own as it was once known as St. Pat's Hall which was a hub of the local community until it closed its door in the late 1990s.
The refurbishment and concert has been organised by Glór Leim an Mhadaidh, who are a cultural group based in Limavady who are dedicated to the development of Irish culture and language throughout the Roe Valley area.