The tractor boys on road for charity 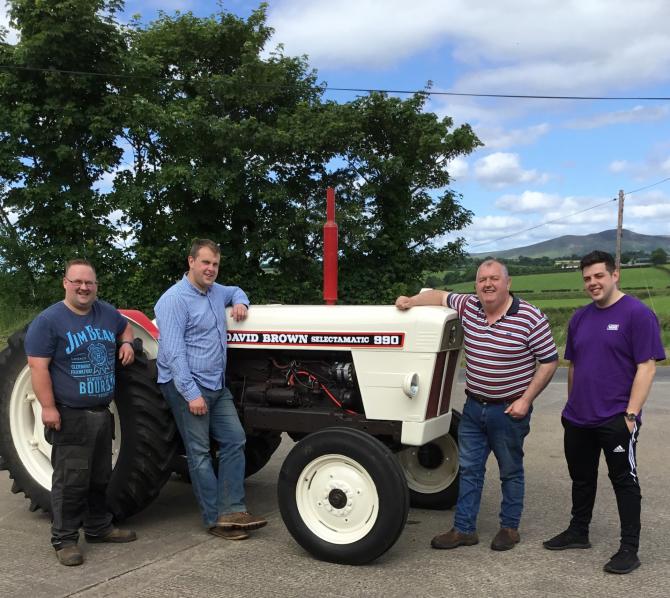 A CHARITABLE quartet from Dungiven will drive the length of Ireland in a vintage tractor to shed light on the tragedy of suicide, as well as raise vital funds for LIPS.
David Wilson, his son Alan, nephew Mark Fulton and friend Gregory Lynch will drive from the most southerly point to the most northerly point on the island of Ireland, in a vintage tractor.
The men will travel approximately 576Km in a classic David Brown 990 tractor over 24 hours from Mizen Head (Co. Cork) to Malin Head (Co. Donegal) between Monday to Tuesday, September 2 and 3.
David and his three charitable chums are fundraising in aid of LIPS (Limavady Initiative for the Prevention of Suicide) to help finance further project work in local schools and communities, and further afield.
The tractor men are doing this Ireland run in memory of three young men who died from suicide in the last 20 years - Norman Black, Gareth Simpson and Jamie Barr.
David's son Alan is hoping to keep the memory of his friend Jamie alive, Norman Black worked with David and they knew Gareth Simpson through Dungiven and Bovevagh Church of Ireland.
Back in June David attended the LIPS Gala Ball when he mentioned to Jamie Barr's dad Sam that he would love to do a tractor run for the Limavady charity.
David said: “I told Sam I would do something for charity and he was more than pleased, so, I then spoke with Mrs Black (Norman's mum) and Mrs Simpson (Gareth's mum) to explain my plan to do the tractor run in memory of their sons.
“I just think suicide is such a serious issue locally and needs to be addressed and discussed.
“To be honest, when I was young I don't remember it being talked about but now it is an epidemic.
“I cannot understand what is different now, are people in despair?
“I believe if people knew the hurt they leave behind they wouldn't do it.
“If we can raise some money for LIPS to help people in the the area and continue their good work, then hopefully we can stop other families going through this pain.
“You have always someone to talk to and share problems, we really must try and stop this serious issue.”
David and the boys will be driving in shifts starting in Mizen Head, County Cork, on Monday evening, September 2, after they travel down from home that morning.
David added: “We will head down early on Monday morning with the tractor on a trailer, and hope to set off from Mizen Head that evening.
“We are aiming to be in Malin Head by Tuesday evening, as long as nothing breaks down!”
Speeding along at 19 mile-per-hour the 1970 vintage David Brown tractor will only be stopping along the way to change driver and to fill up on fuel.
The four boys will take it in shifts to drive the tractor and one to drive the accompanying truck, so at all times two will be driving while two eat and sleep.
David concluded: “We have the map ready, and we are hoping to good weather. We are all really looking forward to it.
“It will be great – so we would love people to sponsor us.”
Sam Barr from LIPS told the Northern Constitution he is delighted the legacy of Norman, Gareth and his son Jamie lives on.
Sam said: “It is really excellent that David and the boys have taken this on.
“We appreciate any fundraising for LIPS to keep us helping and supporting people in the area.
“I was speaking to David at the LIPS gala ball and at the Hard as Oak and he mentioned he wanted to do something for us.
“David has been a keen supporter of LIPS from the beginning, and his son Alan was friends with my son Jamie.
“It's important that the legacy of these boys lives on.”
Statistics show that unfortunately one in 20 people think of suicide every two weeks in NI. Over the past 20 years since the end of 'the troubles,' there have been almost double the number of deaths from suicide than there were deaths during the troubles per year.
Anyone interested in donating to David's tractor run can do so through the Just Giving page.