Lorry pulls a crowd for Rossmar 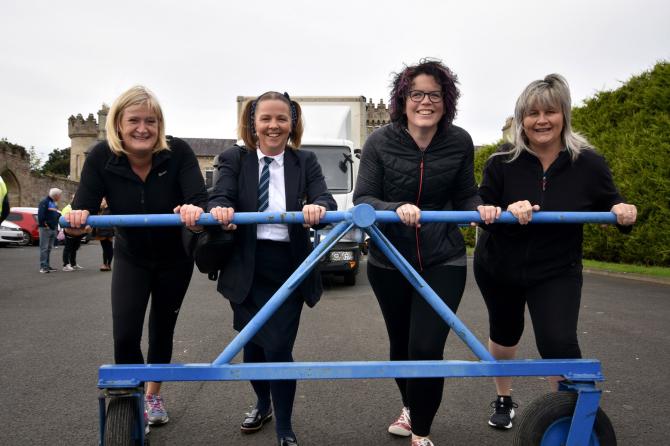 A CONVOY of supporters came out in force in Dungiven to pull a truck 7.5 miles through the town and raise funds for Rossmar School.
Scores of participants took part in the truck haulage which began in the car park of Dungiven Castle ending at the Ponderosa Bar and Restaruant, atop the Glenshane mountain.
Rossmar School is currently in the process of completing the construction of a new school on its current location on Ballyquin Road.
A generous group of contractors, who are currently working with the school's new rebuild, teamed together and came up with the unique idea of lorry pulling by sponsored teams to gather money for new outdoor resources.
Several teams of ten were charged with heaving the large vehicle for seven and a half miles in the chilly September breeze.
The laborious task up the mountain road was no doubt difficult for those involved but they can take a genuine sense of satisfaction from their hard-work and charitable act.
Contractor Eugene McManus is one of the key organisers of the event said:“The target for each team is £1000 so we are hoping that this can help with getting some new equipment for the school.
“We know that this is one of more than a few fundraising ideas that is associated with Friends of Rossmar so they deserve the credit for getting it all organised.
“It's important for people to get behind these events and to support the school where they can.”
Audrey Moore, from Rossmar, told the Northern Constitution about the importance of the fundraising for the new outdoor equipment.
Audrey said: “The aim of the fundraising is to help buy new outdoor play and sensory equipment for pupils.
“I'm a parent and a classroom assistant at the school as well as being Chairperson of Friends of Rossmar.
“I know the benefits that this equipment can have for our young people. It may seem like a small addition to school life but it can have a powerful impact.
“These young people deserve everything that we have in our power to give them.
“These fundraisers do the world of good to ensure we can give our pupils the best experience possible.”
More fundraising ideas are in the pipeline from Friends of Rossmar. Further details will confirmed in the coming months.