The wait is over for Limavady customers! 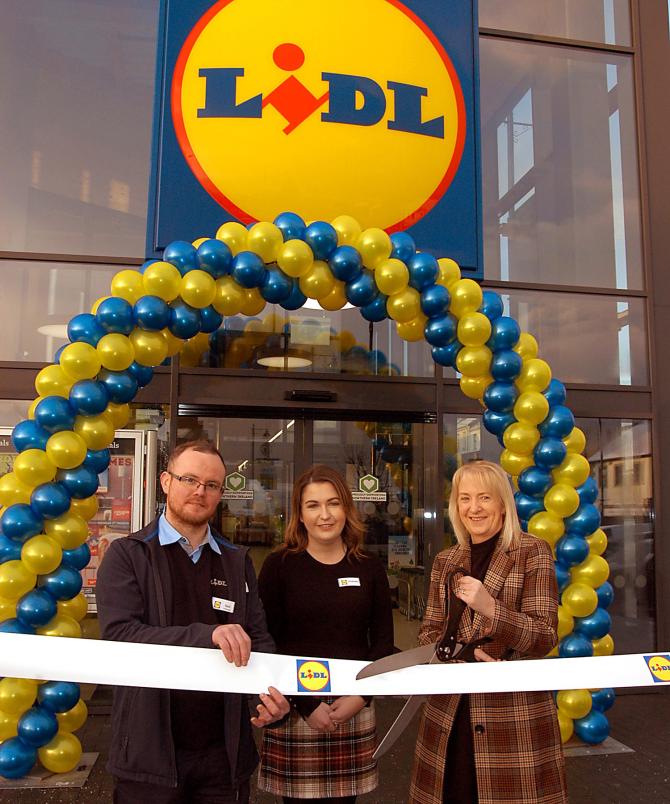 CUSTOMERS in Limavady were overjoyed last week as Lidl finally opened the doors of its newly expanded and enhanced store on Main Street.
The impressive new-look store, which is part of a multi-million-pound investment by Lidl to support its expansion and new store programme, was opened by pupils from nearby Rossmar School who were the guests of honour to officially cut the ribbon and welcome hundreds of customers to the new premises.
Delighted staff and pupils of the local school were presented with a £1000 bursary as part of the chains continued commitment to investing in the local community.
Pupils were joined by Lidl’s very own Autism Assistance Dog, Kyra, who was on hand to greet customers and raise awareness of the store’s weekly Autism Aware Quiet Evenings. This offers customers a calmer shopping environment every Tuesday evening from 6pm – 8pm.
An additional 10 jobs were created after extensive renovations and rebuilding at the Lidl store in the town.
Boasting a modern architectural design, the state-of-the-art concept store replaces the former Lidl site, which was demolished to pave the way for an extensive rebuild of the store, with expanded floor space and a transformed interior.
Along with a more spacious shopping experience, customers will benefit from a wider product range, a new ‘Lidl-to-Go’ coffee machine and a larger bakery area with an increased range of freshly baked goods. The premises includes a 79-space car park, including two electric vehicle charging points.
Lidl Northern Ireland has also submitted a planning application to install a solar photovoltaic system within the store later this year to improve energy efficiency and contribute towards the store’s green credentials – just one of a range of environmental measures undertaken by the retailer across Northern Ireland to substantially reduce its overall carbon footprint and environmental impact.
Niall Harrigan, Limavady Store Manager, said:
“This investment puts the Limavady community first and further supports Lidl’s contribution to the local area, reinvigorating two vacant units and increasing the local workforce to a total of 28 staff.
“We are thrilled to welcome customers back through our doors today to enjoy a new and improved shopping experience.
“We have been committed to bringing the community of Limavady exceptional prices and value since opening in 2000, and we reaffirm that promise today with the opening of this rebuilt store.
“The new opening has been highly anticipated within the community and it’s fantastic to see a busy store.
“We are also delighted to welcome Rossmar School to mark this important milestone with us.”
Lidl Northern Ireland operates 39 stores across Northern Ireland. Since 2008, Lidl Northern Ireland has invested around £8 million each year to enhance its service provision and expand its presence in the region. Last year, that figure was almost £13 million.
In 2019, Lidl Northern Ireland confirmed plans for a new supermarket at Holywood Exchange and at Newry’s Buttercrane Shopping Centre, while plans for new stores in Ballymoney, Newtownards, Newcastle, Castlereagh and at High Street Mall in Portadown are also progressing.
In September, Lidl Northern Ireland revealed that it contributes around £180 million a year to the local economy, sustaining 3,500 jobs while buying and exporting as much as £290 million worth of local goods. The store will be open from 8am to 9pm Monday to Saturday and 1pm to 6pm on Sundays.