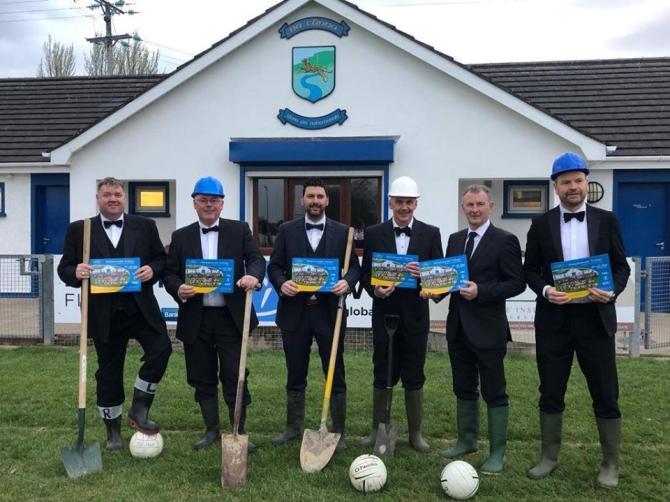 AS Limavady Wolfhounds enter their 40th year the club has gained approval for the regeneration and development of their current club grounds, Páirc na gCúnna.

The Wolfhounds are a relatively young club, in GAA terms, having only been founded in 1980, and so perhaps haven't had the same head-start as some of the more established clubs in County Derry.
However, once the new plans come into fruition Na Cúnna will be in a position to rival any club in the county and further afield.
It is hoped investment in the facilities and the expansion of the club pitches will help to nurture and grow youth squads who will be capable of competing with other clubs at a high level in the future.

The development is to include a new fully sized grass pitch and a 4G training area, team dugouts, ball catch nets, goal posts and fencing along with a community walking path.

The development site will be located on lands adjacent to Limavady Wolfhounds GAC existing pitch and clubhouse at Scroggy Road and to the rear of Bells Hill.

Wolfhounds club committee member Declan Quigley and his company AQB Architectural Workshop designed and submitted the application for the club.

Declan said: “After the 12 week public consultation process was completed the planning application for the work on the hill field was lodged with the planners on March 16 last year.

“The issue of the approval will now leave the club spade ready to seek grants for the works involved.”

Willis said: “The whole process started around ten years ago as the club was running out of time on the grounds lease.
“The club then began discussions with Limavady Parish and Monsignor McCanny and he kindly gave the club an opportunity to buy the land.

“After securing our main pitch we turned our eyes to our club rooms where we made it a gender friendly environment for all at the Wolfhounds after the club received a rural development grant.

“We then spent £65,000 on building our new club gym which was opened last year by GAA President John Horan. Everyone is pleased with the how the gym has turned out.
“The gym is a great asset, not only because it keeps our senior teams fit and conditioned, but because it gives underage players an environment to develop for the future in a familiar and comfortable setting.

“We now look to our new development after planning approval and we hope to break ground as soon as we are able secure the funding.

“Our club members have been fantastic and thankfully we can always rely on their support for our plans.
“We also want to reach our hand out to the whole community to let them know that our club is open to all and we are always happy to welcome new members.

“Thanks to to financial donations, our gala ball, a successful auction and other club fundraising events the club has had good access to funding and we hope to continue fundraising events in the future and to apply for upcoming grants.

“Thanks must be paid to our main committee team, AQB Architectural Workshop, Martin King French & Ingram along with Derry GAA and Ulster GAA for all their help throughout the long process.

“The development is going to be a two to three year project and we ask for all the help and support that we can get to make the plans realised. After all, it's not just a pitch. It's our home.”