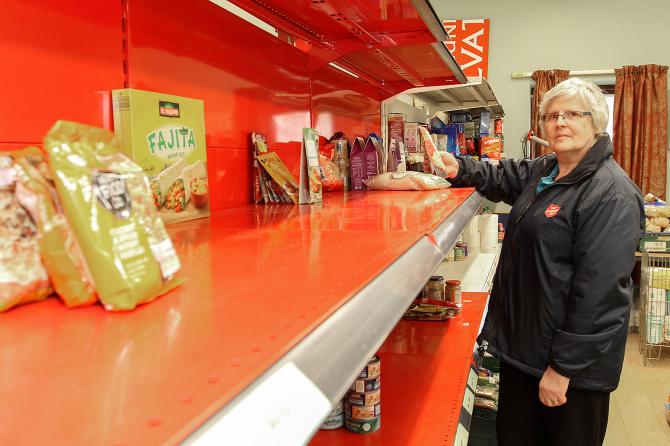 FOOD banks in Limavady have been finding it difficult to cope with the demand for goods in the current Covid-19 situation which has led to greater coordination between local charities and community associations.
An initiative has been launched in the Roe Valley area where several groups and organisations are working together to deliver necessities to those most in need in our community during such unprecedented and unsettling times.
In last week's edition we reported that there were several businesses and community groups in Limavady who pledged to help out with deliveries and food collections.
This week there have been further pledges by local businesses and there is a real sense of social cohesion in face of such a serious crisis.
Sinn Féin Councillor, Dermot Nicholl spoke to the Northern Constitution about a food collection and delivery service which is being made available to those in the locality who will find it difficult to get hold of day to day items.
Councillor Nicholl said:
“In light of the current pandemic it's paramount that communities look after each other and that we pull together to look out for the elderly and the most vulnerable in our community.
“The main idea of what we are trying to do is to co-ordinate with all the groups and organisations who have the same goal, which above all is to help people in need.”
“It's important to note that these aren't politically motivated plans, it's community based and we're working with everyone across the board to deliver this much needed service during a global emergency.
“Causeway Coast and Glens councillors have been in communication with each other to come up with plans and find solutions to local logistical issues.
He continued: “Co-ordination is being done in collecting food, making them into parcels and then delivering them to the relevant outlets or organisations.”
“St.Vincent de Paul, Salvation Army and other community associations have been dealing with this sort of thing regularly before the pandemic so it's important to support them and allow them to continue their good work.”
“I've already had plenty of people approaching me to get involved so it's very clear that a lot of people are keen to help others.”
“I've been in touch with several businesses who are willing to lend a hand also.”
Mr Nicholl also explained how the churches of Greysteel, Eglinton and surrounding areas are also coming up with similar plans so it is coming from all aspects of the community.
He continued: “It really highlights people helping people which gives us hope in such a stressful time for many.”
Joan Archibald from Salvation Army in Limavady said:
“Due to the current situation we realise the great need for people to be helped with food packs.
“We are working together with St. Vincent de Paul, Roe Valley Food Bank, Tesco, LCDI and several other groups in the town to help deliver this much needed service.
“We are also working closely Dry Arch Children's Centre to collect supplies as needed.
Joan went to praise the generosity of the local community saying:“We are very much indebted to the local community for their selfless gestures and donations which is making gathering products possible.
“Councillors Alan Robinson and Orla Beattie are on board and have pledged their support to what we are doing.
“Churches in the local community are urging their congregations to support us and donate where possible so we are getting a lot of support.”
“Our office is currently closed but we are working furiously behind the scenes.
“Our main drop off point is at Tesco supermarket and we ask the community to donate what they can.”
Jim Herron from St Vincent de Paul Limavady said:
“Ordinarily SVP Limavady deals with 10-20 requests per week to do with emergency situations which affect local families.
“These issues can range from gas and electricity to uniforms and household appliances.
“These requests are still likely to be given to us as the weeks and months go on so we will strive to continue answer requests as they come in.
“We face a challenge because many of our volunteers are elderly and have been self-isolating so we appreciate any help.”
Limavady Town Team released a public statement earlier this week describing what they plan to do as the situation progresses.
“Limavady Town Team, supported by representatives from the community, business, statutory, faith and political sectors of the town are pleased to announce a co-ordinated framework for responding to the up and coming needs we may face in the next few months.
“We would ask all volunteers (existing and new) who can help their neighbours who have had to self-isolate to register with the Limavady Volunteer Centre.
“As the people who need the help are identified a local vetted volunteer will be asked to provide the support required.
“It is hoped that by having a team of volunteers in each local area we can ensure that the service is sustainable for as long as the virus is active.
“Limavady Urban, Drumsurn, Magilligan, Greysteel, Ballykelly, Burnfoot, Gortnaghey, Benedy, Dungiven, Foreglen, Drumboughil, Largy, Feeny.
“The type of service which volunteers might undertake include: Delivery of meals, shopping, good morning call, delivery of a care package, dog walking and collecting prescriptions.”
Anyone who wishes to volunteer or is in need of service should contact Limavady Volunteer Centre on 028 77765438.