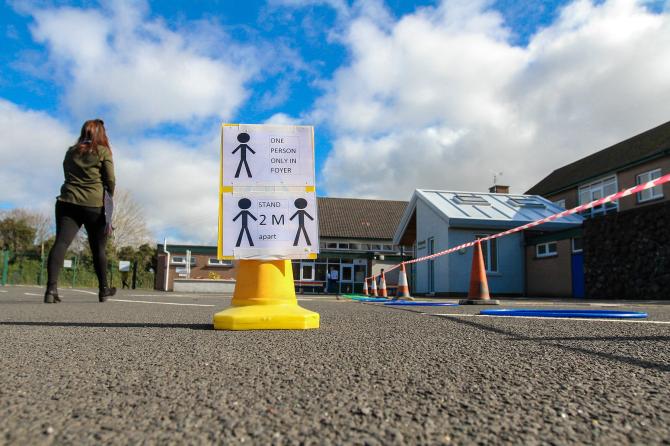 IT was an emotional day filled with uncertainty for pupils, staff and parents after schools across the Roe Valley closed their gates on Friday afternoon, particularly those in their final year, who were forced to put celebrations on hold until further notice.
The announcement for schools to close across Northern Ireland was made last Wednesday as part of the country’s ongoing response to Coronavirus.
It is understood that schools will advise parents of their opening arrangements for vulnerable children and those of key workers.
Across local schools, parents and guardians were called upon to collect learning packs for their children, compiled by dedicated teachers who spent many hours creating resources in order to prepare their pupils for home schooling.
Local mum, Kerri Heaney, whose son Curtis had to cut short his final year of Primary Seven at Ballykelly PS, told the Northern Constitution: “Scary times ahead not knowing when the school is going to open again but fortunately, Ballykelly school had always kept us updated on the whole situation by message, Facebook and website.
“They have set up school closure learning plan packs for each child which include activities and timetables as a guideline for parents which will definitely help with home schooling.”
She continued: “ This is a lot to take in, not just for the children but for us parents!
“Curtis was to finish his final year this year, as were so many other children.
“At first he didn’t really think much of it but now since all schools have closed and don’t look to be opening, he quickly became upset that he will not see some of his friends that live nearby.
“He was even more upset that he won’t get to go on his school trip to Scotland and have a leavers assembly or disco with all his friends he has made over the last seven years.”
As of Thursday March 19, Education Minister Peter Weir announced that GCSEs, AS and A level exams will not proceed this summer.
Mr Weir stated that CCEA will continue to work with other awarding organisations to develop a “robust process for awarding grades.”
He said: “The plan is to use a combination of prior achievements, internal teacher-assessed tracking information, predicted grades and analysis and modelling of existing data trends to provide the necessary assurance about the robustness, accuracy and fairness of the grades being awarded.”
A concerned local mum, whose daughter was preparing for her GCSE's at St Mary's school in Limavady has described the current situation as “surreal.”
She told the Northern Constitution: “I think at present regarding GCSE's, the school is just as much in the same boat as us parents.
“Thankfully we have been told that the children will receive grades, which hopefully will be the grades they deserve after two years of hard work and dedication.
“We are hopeful that the students who wish to return to sixth form will receive a place.
“It has been a tough few days for them as like the primary seven children, not knowing if or when they will see their friends again.”
Meanwhile, the Education Minister issued further guidance in relation to Covid-19 on Friday saying: “I would ask you all to consider only sending your child to school if there are no other viable arrangements; schools should be open to vulnerable children or those who have a parent/carer who is a key worker in relation to dealing with the Covid-19 response.
“To be clear, both parents/carers do not have to be key workers.
“There will naturally be a period of transition and we will undoubtedly face a range of challenges, both expected and unforeseen. “Together we will work through these difficulties by mustering the patience and compassion that such extraordinary times require.“I want to thank you all for your support and forbearance in these very difficult times.”