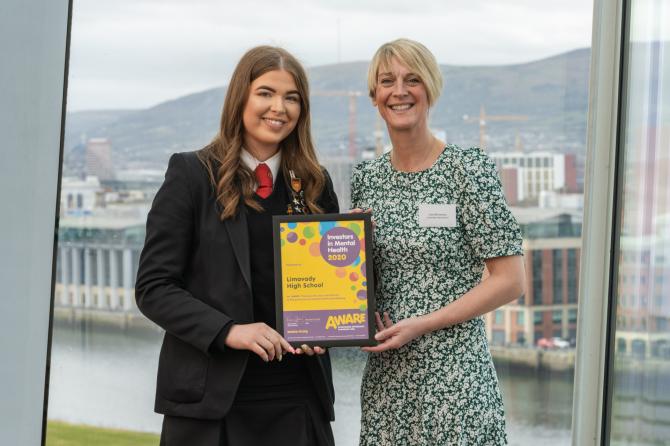 PUPILS and staff at Limavady High School have been recognised for their achievements and valuable contribution to increasing awareness of mental health at a recent award ceremony.
Year 13 pupil, Morgan Campbell and Head of Sixth Form, Mrs McCartney, attended the Investors in Mental Health Awards 2020 which was held in the iconic Titanic Belfast.

The Investors in Mental Health Awards is a new initiative developed by AWARE, the depression charity for Northern Ireland, with the aim of providing recognition to schools, individuals or organisations who are making a significant contribution to the promotion of positive mental health in Northern Ireland.
Limavady High School were awarded an Investors in Mental Health Award for hosting AWARE mental health awareness programmes such as Paws b Mindfulness or Mood Matters for Young People, which have been delivered to pupils.
The school was also recognised for hosting public talks for students and setting up support groups for young people.
The Investors in Mental Health award will enable them to showcase their strong pastoral care system.
Following the school’s success, Principal Mr Darren Mornin said: “The school is very proud of the work that it does around this very important issue, not only to support our pupils but also the staff.
“There have been many reports recently about the increasing issues around mental health in young people and within our society.
“The recent Spotlight programme on the BBC this week gave further examples of the challenges that we all face as a society.
“We as a school have mental health as a key priority and an example of this is the work that we do with Aware.
“This award was in recognition for a programme that we delivered to our Year 13 pupils called Mood Matters, an interactive programme which gives young people the knowledge and skills they can use to help maintain good mental health, build resilience and deal with the ever increasing problems that young people have to deal with.
“The programme also focused on what mental health is, things that have an impact on our mental health and strategies we can use to try to improve our own and others mental health.
“The staff have created a Health and Wellbeing committee and for the first time the school held a Health and Wellbeing Week in January.”
Mr Mornin said significant resourcing is necessary to support all schools in the area and stressed that the Government needs to make this a key strategic priority moving forward.
Meanwhile a spokesperson for suicide awareness and prevention charity, LIPS told the Northern Constitution: “We are delighted that Limavady High School has been recognised for their investment in the wellbeing of their pupils.
“We have found their engagement with LIPS and what we are trying to achieve to be incredible, which is the same throughout the entire Limavady learning community.
“Our schools recognise the challenges facing their pupils and the role they can play in providing them with tools to manage their emotional health as well as their physical.
“We are providing further training for schools over the coming months to support their efforts alongside our own partnership with AWARE in providing a local support group."
Additionally, the Investors in Mental Health Awards recognised individuals who made outstanding fundraising contributions to AWARE over the past year.
Depression is currently the leading cause of disability worldwide and at this time one in nine people in Northern Ireland are living with a diagnosis of depression.
AWARE wants to highlight the importance of good mental health and encourage open discussions around the subject.
The Investors in Mental Health Awards will seek to create a community where positive mental health is celebrated.
Karen Collins, CEO of AWARE said, “We are delighted to have held our first annual Investors in Mental Health Awards.
“At a time when stories surrounding mental health are often negative, we believe it’s important to tell the positive ones too.
“The day was a celebration of the contributions being made towards positive mental health in Northern Ireland.”
She concluded: “We would like to thank and congratulate all the award recipients for their fantastic efforts throughout the past year”.
* To find out more about the Investors in Mental Health Awards, how to become an Investor in Mental Health, or to check out the full list of 2020 winners go to www.aware-ni.org