McGlinchey on the right track to British title 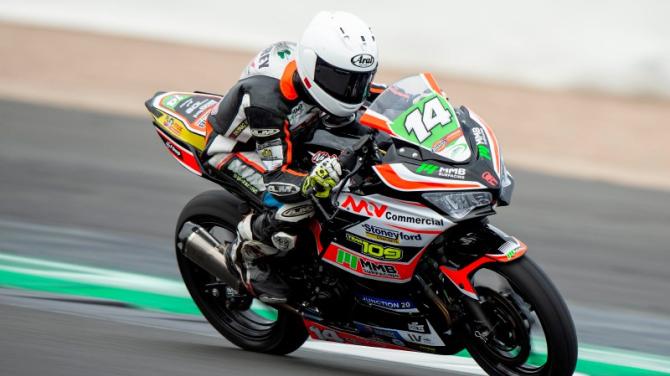 AGHADOWEY rider, Eunan McGlinchey, scored a race win and a third-place finish at the latest round of the Dickies Junior Supersport Championship at Oulton Park.

McGlinchey heads to the final round of the year at Brands Hatch with one hand on the title by virtue of the fact he holds a forty three point advantage over his closest rival, Brian Hart.

The weekend got off to a fantastic start for McGlinchey as he topped Friday’s free practice session by over two seconds in the damp conditions.

Qualifying proved a lottery for the local twenty-year-old as he finished the session in seventh meaning he would have to start the opening race from the front of the third row.

As the lights went outMcGlinchey set about passing a number of riders on the opening lap, making up for his third row start.

With a gap of almost four seconds to Hart in the lead, victory was looking like a task too far for the series leader. But as the laps ticked by McGlinchey was eating into the KTM riders’ lead to the tune of almost a second a lap, before making his move on the penultimate lap and taking the lead.

Holding off Hart’s attempts on the final lap, McGlinchey crossed the line to take an incredible victory and extend his lead in the series by another five points.

This gave McGlinchey the chance to wrap up the Championship in the second second race. Starting from pole position, McGlinchey, Hart and Elliot Pinson broke away at the front and battled it out for victory.

As they began the last lap of the race it was all still to play for, and as they three entered the final corner, McGlinchey went for the lead - and what would have been the title - only to make a small but costly mistake. As he exited the corner he slipped back to third behind Hart and eventual winner, Pinson.

Reflecting on the two podium results, McGlinchey said: “Coming away it was a good weekend, free practice started off brilliantly, finishing the session at top of the standings.

“Into qualifying it was a patchy track in terms of the conditions, so I didn’t push too hard knowing I could get off the line and make up the positions.

“In the opening race I had to claw back over three seconds of a gap to be able to challenge for the win, but the bike worked perfect in the tough conditions and I was able to take the win.

“Race two was a tight one between myself, Hart and Pinson, and as it has done many times before it all came down to the last corner on the last lap.

“I made a mistake coming out and ended up having to take third, but coming away with two podiums I am happy and looking forward to Brands Hatch. I know what I have to do and I am ready to go.”

Team manager, Paul Tobin, added: “Eunan rode an incredible race one, coming from seventh on the grid, to close a three second gap to the leader and then pass the more experienced Hart on the KTM UK backed machine to win was superb.

“He rode a shrewd race two and did have a look at Pinson for the win at Lodge Corner on the last lap, but took a sensible podium for more Championship points. The whole team are now looking forward to the final round.”