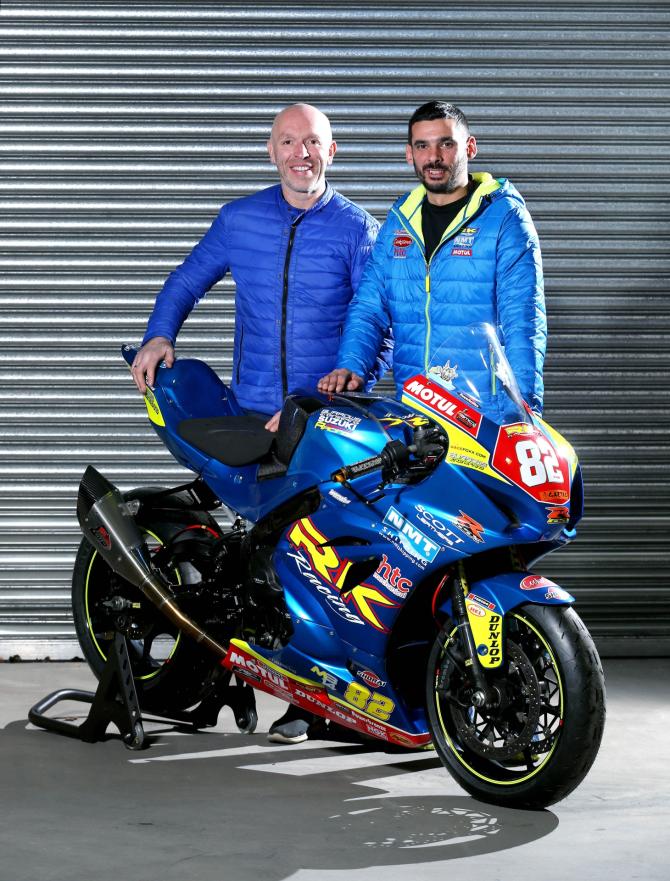 Derek Sheils and Tom Weeden will be sporting an eye catching new Burrows RK Racing livery when they line-up for the start of this year’s fonaCAB International North West 200 in association with Nicholl Oils.

Sheils makes his return to the North coast races after missing last year’s event. The Dubliner will campaign a pair of GSXR 1000RRs in both the Superstock and Superbike races on May 12-18. Weeden will ride a superstock spec Suzuki in the big bike races at Portrush alongside appearances in both Supersport events on a R6 Yamaha.

"My main ambition in 2019 is to get some strong top ten finishes in all of the international road races.’ 36 year old Sheils says. It is a modest ambition for the Dubliner who finished 5th in the opening Superbike encounter at Portrush in 2017.

"I never seem to have enough power and top speed for the North West.’ Sheils admits.

"It is hard to compete with little fellows on factory machinery around there. I got that 5th place in 2017 in the damp but had to ride the wheels off the bike when it was dry in the second race just to get 9th. The new Suzukis should help us close that gap this time around."

Maidstone’s Tom Weeden also missed last year’s North West, ruled out by serious injuries sustained in a TT2017 crash. The 2016 Senior Manx Grand Prix winner is now fully recovered and looking forward to tackling the famous 8.9 mile Triangle circuit on the fastest machinery he has ever had at his disposal.

"Joining the Burrows RK Racing team is a massive opportunity for me and I have got to make the most of it." said the 25 year-old.

"I made my debut at the North West in 2013 and my best finish has been 17th in a Supersport race. I want to be pushing into the top ten this time around."

"We are coming to the North West with our new sponsor this year and it will be an important event for us and our riders after they both missed last year’s meeting." team principal, John Burrows admitted.

"I want to help Tom get his spark back after his injury. He was the fastest newcomer at last year’s Ulster and he hasn’t forgotten how to ride a motorbike. Derek had that great 5th in 2017 and I want to see him back up there at the front, mixing it with Glenn Irwin, Alastair Seeley and the rest of the front runners."

Event Director, Mervyn Whyte, MBE, is delighted to have both Sheils and Weeden back on the North West 200 grid.

"Derek has produced some great performances at the North West and Tom has plenty of promise to deliver." says Whyte.

"John Burrows has developed one of the most professional teams in the road race paddock and it will be fantastic to have the team in it’s new livery on the start line in May."