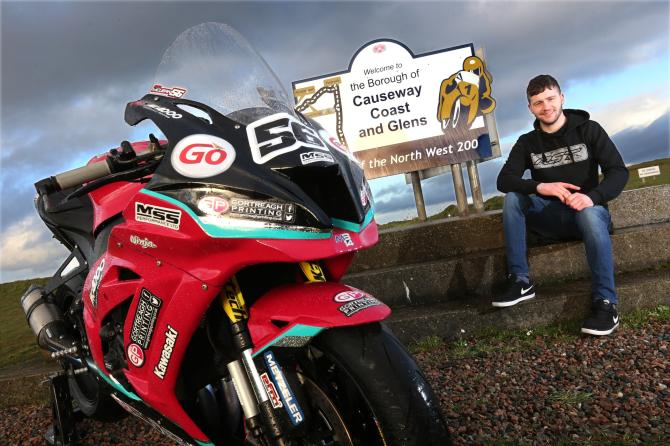 TOBERMORE racer Adam McLean admits he is hoping for better luck than 12 months ago when he lines up on the grid in May's fonaCAB International North West 200 in association with Nicholl Oils.

The 22-year-old, who will ride McAdoo Kawasakis in all of the classes next month, finished just the one race last year, claiming fourth place in the opening Supertwin event.

He also suffered a heavy fall from his Hanna ER6 Kawasaki after clipping a kerb on the exit from the Juniper Hill chicance during the final qualifying session.

Despite those disappointments, McLean maintains there is better to come around the Triangle circuit.

"I've shown I have the pace for some decent results, I just need to bring it altogether to get some solid results," he says.

McLean is also hoping to put behind him the trauma of losing his McAdoo team-mate, James Cowton, who sadly lost his life in a crash at last year's Southern 100 on the Isle of Man.

"I felt really down after what happened to James," adds McLean.

"But I wanted to race on and at the Ulster Grand Prix I rode the best that I've done in may career."

Victory in the Supertwins race at Dundrod aboard Roy Hanna's ER6 Kawasaki represented McLean's first international road race and he quickly followed that up with second and fourth place finished in the two Supersport races.

Should he produce that sort of form around the 8.9 miles north coast circuit then McLean can reinforce his reputation as one of the young riders to watch.

Even if he admits he has problems getting to grips with the bigger bikes.

"I am still learning my way around the ZX10RR superbike," he explains.

"At the minute it is really taking me for a sail but my priority is to get lots of miles in during testing and to learn. I know it can take two to three years to get to grips with a superbike so I’m not panicking."