Hickman looking to build on 2018 success 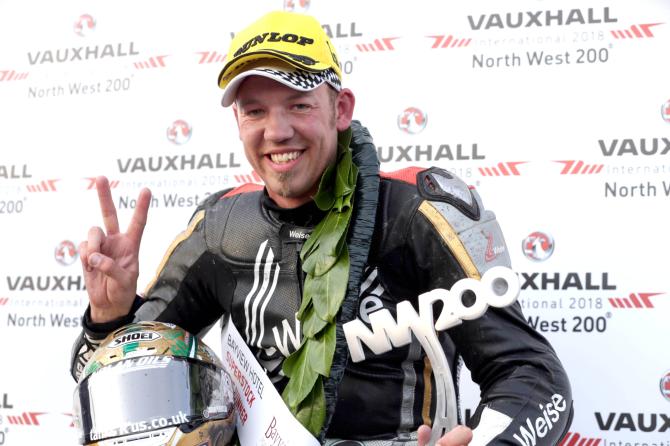 THE world's fastest road racer - Peter Hickman - aims to build on the success of last year as he prepares to get his road racing season up and running at next month's fonaCAB International North West 200 in association with Nicholl Oils.

The 32-year-old began 2018 with a maiden victory around the Triangle course in Thursday's Superstock race and followed that up with wins in the Superstock and Senior TTs on the Isle of Man.

And it's precisely that sort of form that he is searching for a couple of weeks out from the 90th anniversary of the north coast event.

"I will have done the opening two BSB rounds before I come to the North West so I should be up to speed and ready to go hopefully," said Hickman.

The Burton-on-Trent man will ride BMW S1000RRs for the Smith’s Racing squad in both the Superbike and Superstock events at the NW200, plus a Trooper Beer Triumph in the Supersport races.

"It was really cool getting the better of Alastair Seeley to get my first North West win last year," continued Hickman.

"I had been close a few times in Supersport and stocker races but it hadn’t happened and then it all came together last year."

Hickman's preparations, however, have been hampered somewhat by delays in delivery of his new bikes.

"I hope to ride the superbike this week for the first time and I probably am at a bit of a disadvantage," he admitted.

"We are just waiting on BMW and there isn’t anything I can do about that."