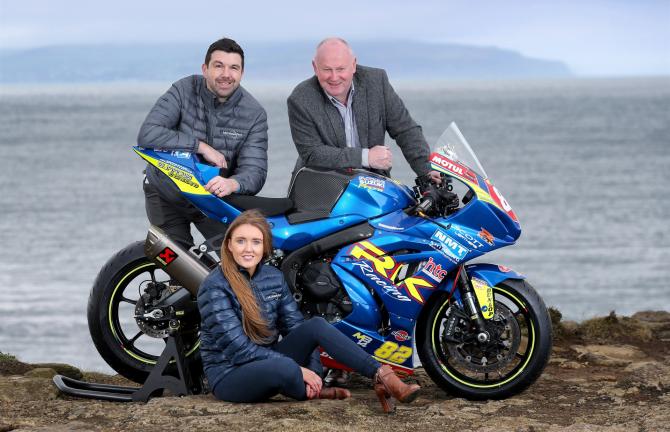 With the International North West 200 only two weeks away, local sponsor MCL InsureTech has announced that spectators can look forward to Random Acts of Kindness, as the company gives away £5 food vouchers during race week.

Coleraine based online insurance provider, MCL InsureTech, will sponsor the Thursday evening Supertwin Race at the 2019 fonaCAB International North West 200 in association with Nicholl Oils which runs from 12 May to 18 May. Discussing the lineup for the Supertwin Race and the Random Acts of Kindness food promotion, Gary McClarty, Chief Executive of MCL InsureTech Ltd says:

"We are a Coleraine based company and we recognise the massive appeal that the International NW200 has in profiling what the North Coast has to offer. We're absolutely delighted to be sponsoring the fiercely contested Supertwin Race which has attracted high profile motorcyclists such as Martin Jessopp. For any road racing enthusiast, getting to watch these individuals in action, is simply enthralling and that’s what the NW200 is all about.

“The commitment and dedication of spectators means that they are often willing to stand out in all types of weather to see their heroes. So, this year we thought we would reward their enthusiasm with some Random Acts of Kindness.  We will be giving away £5 food vouchers to 500 people during race week.  It’s our way of saying thanks for supporting the motorcyclists and for being there to make the NW200 what it is – the jewel in the crown of the international road racing calendar.”

MCL InsureTech staff will be distributing the Random Acts of Kindness food vouchers, which can be redeemed at any food outlet in the International NW200 Paddock or Trade Village.

“Over the past number of years, the Supertwin Races have been both exciting and competitive. This year's entry includes the cream of the road racers in Glenn Irwin, Michael Rutter, John McGuinness, Maria Costello and Horst Saiger to mention but a few. With this incredible line up I have no doubt this year’s MCL InsureTech race will be something to look forward to.

“The North West 200 is celebrating its 90th anniversary in 2019 and MCL InsureTech’s Republic of Ireland operation is celebrating its 10th anniversary this year. Both play an important role in the economy of the North Coast region and we hope the global exposure MCL InsureTech will receive as a result of the sponsorship of the Supertwin Race will assist this leading insurance provider with its expansion plans."

Over the last ten years MCL InsureTech has become one of Ireland’s leading online insurance companies and it has recently expanded and launched its brands in Northern Ireland including www.its4women.co.uk. Commenting on the sponsorship Gary McClarty, Chief Executive of MCL InsureTech Ltd adds:

"MCL InsureTech's sponsorship of the 2019 International North West 200 Supertwin Race will assist us in raising awareness of our brands. We have an ambitious expansion plan. Our aim is to secure 5% to 10% of the local online car insurance market within five years.

"We will be creating 10 new jobs in the next 6 months and a further 40 new jobs over the next three to five years. Our staff numbers have more than tripled over the last decade, going from 30 up to 102."