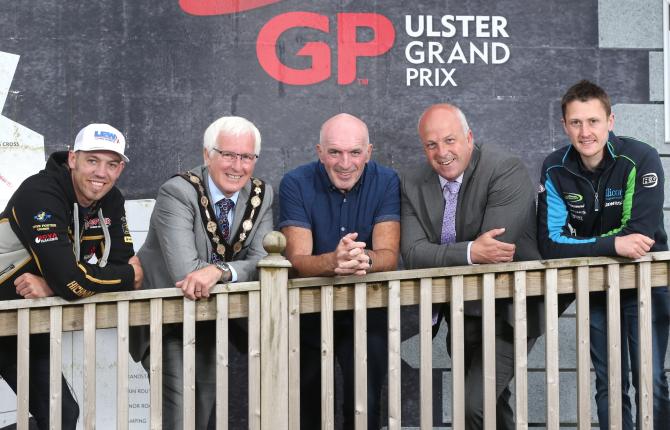 Peter Hickman and Dean Harrison have hinted that records could tumble at this year's Ulster Grand Prix which is due to get underway later this summer.

The blossoming rivalry between the two English riders is one which has everyone talking after their exploits at the Isle of Man TT this month as Hickman claimed a hat-trick of wins whilst Harrison was the victor in the Senior TT. Next up on the International calender is Dundrod. Both riders had a look around the course yesterday at the launch the 2019 Ulster Grand Prix. The event is scheduled to take place on 5-10 August with both men admitting they are eyeing the opportunity to reinstate Dundrod as the world’s fastest race track.

"If the conditions are right and the track is good I think it can be the fastest again," said Peter Hickman.

It was the Smith’s BMW racer’s scintillating 135.452mph lap in last year’s Senior TT that saw the title shift to the Isle of Man’s Mountain course but Hickman thinks Dundrod has an advantage.

"Overall I think the Ulster is a faster track with only one slow corner." he said.

Harrison, who can still lay claim to being the fastest ever rider around the Dundrod circuit with his 134.614mph mark set on his way to winning the 2017 Superbike race, reiterated the point of his arch-rival.

"I think it is a faster circuit and all we need is sunshine and a good close race and the lap record could go," said the Silicone Engineering rider, however, both riders admitted that they will be aiming to finish in the winners enclosure.

"I would rather have a podium than a lap record even if it is a world record," Harrison admitted.

"I approach every race in the same way," he said. "I try to get on the podium and if you are in the right place at the right time the wins will take care of themselves."

The pair have dominated road racing’s leading events over the past two seasons and laid down emphatic markers at Dundrod.

The duo will go head to head in the Supersport, Superstock and Superbike classes this time around with Hickman campaigning a brace of Smith’s BMW S1000RRs in the big bike classes plus the Trooper Beer Triumph in the 600cc class. Harrison will be Silicone Kawasaki mounted in all three divisions.