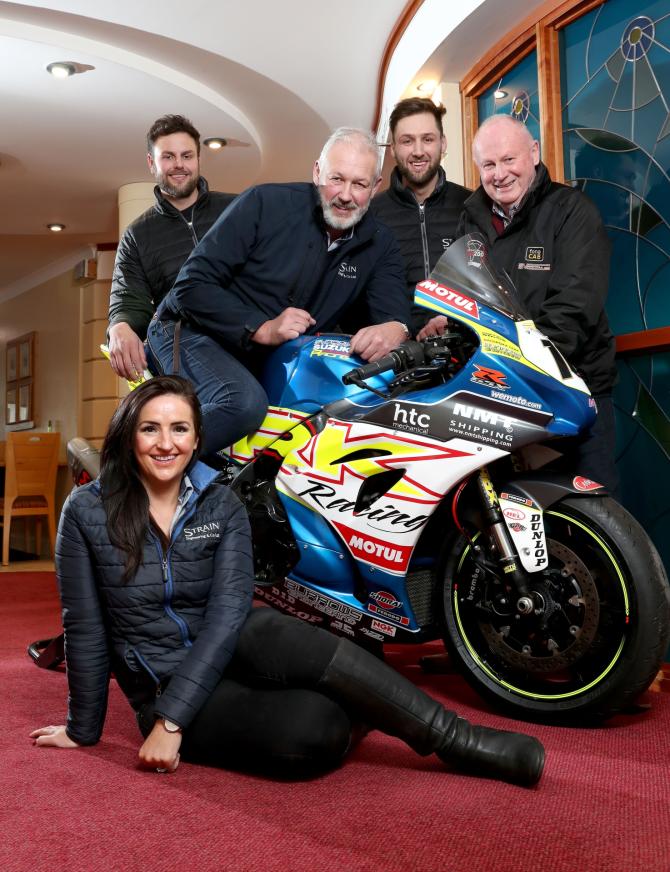 North West 200 Event Director Mervyn Whyte (right) pictured with representatives of Strain Engineering who have been announced as the new Superstock Race sponsor.

The news comes just a week ahead of the annual North West 200 'Meet the Stars' launch event which is due to take place in the Lodge Hotel next week.

The Superstock Race has been a permanent fixture on the Thursday evening race schedule for a number of years, running alongside the Supertwin and Superbike classes. However, this year, fans are due to be treated once again as an all new four-lap sprint Superbike Race is set to go ahead on Thursday at this year's event.

This year's grid is one of the most exciting to date, with the likes of Michael Dunlop, Glenn Irwin, John McGuinness, Alastair Seeley and Dean Harrison already confirmed whilst a whole host of newcomers are also set to make their debuts at the event.

Commenting on yet another sponsorship deal, Event Director Mervyn Whyte MBE said: “There have been some changes to the line-up of race sponsors at the North West 200.

“It is a mark of the visibility and exposure the North West 200 can offer sponsors that we are able to attract new support from companies with international reach such as Strain Engineering. We are delighted to have the support of the Mulholland family for a Superstock race that promises to provide close and exciting racing on Thursday evening,” he added.

Alan Mulholland, Director of Strain Engineering continued: “As a company, we are delighted to be part of this year’s NW200, Northern Ireland’s largest annual sporting event that attracts visitors from all over the world.

“We have watched the North West 200 for many years and are looking forward to being part of it this year as proud sponsors of the Superstock race on Thursday, May 14.”

*Read the latest road racing news inside next week's Chronicle.