'A man of dignity, respect and love' laid to rest 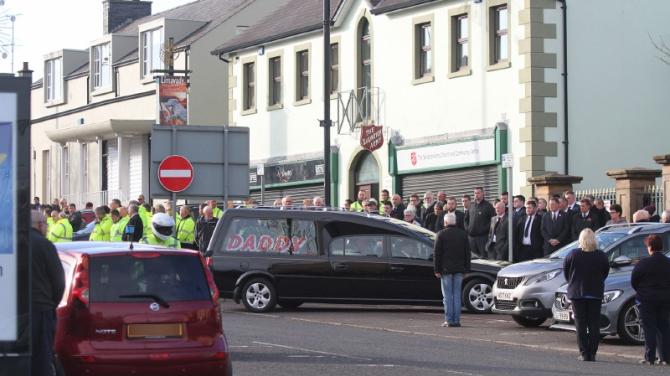 LIMAVADY came to a standstill on Saturday (November 10) as hundreds turned out for the funeral of “a true gentleman” who was tragically killed last week.

Military veteran and part-time firefighter John Winton (51) died as a result of a collision with a bin lorry on Tuesday, November 6, in the Mount Eden area of the town.

Mr Winton who was employed by Causeway Coast and Glens Council, died in the Mount Eden area of the Co Londonderry town.

Emergency crews who rushed to the scene included members from Limavady Fire Station where Mr Winton worked as a part time firefighter.

The Mayor of Causeway Coast and Glens, Brenda Chivers, also offered her condolences.

She said: "Our thoughts and prayers are with John's family and friends and we offer them our heartfelt sympathies at this time."

Mr Winton had previously served as a soldier in the Army and toured Afghanistan before returning to his beloved home town three years ago.

The 51-year-old’s Army comrades have paid tribute to the popular soldier.

Retired Army major Jim Austin said: “The Regimental Association of The Queen’s Royal Hussars (The Queen’s Own and Royal Irish) is shocked and deeply saddened to hear of the tragic death of John Winton.

“John joined The Queen’s Royal Irish Hussars in 1987 and served a full career with the Regiment retiring in 2010 in the rank of Warrant Officer Class 2.

“He served with the Regiment in Germany, UK and Canada and on operations in The Gulf, Bosnia, Kosovo and Iraq.

“John was a highly respected and popular soldier and will be dearly missed by his comrades.

“On behalf of The Chairman and all members of the Regimental Association we send our heartfelt condolences to his family and friends on their loss. Mente et Manu.”

A PSNI probe is under way into Mr Winton's death.

The Health and Safety Executive has also launched an investigation into the circumstances surrounding the fatality.