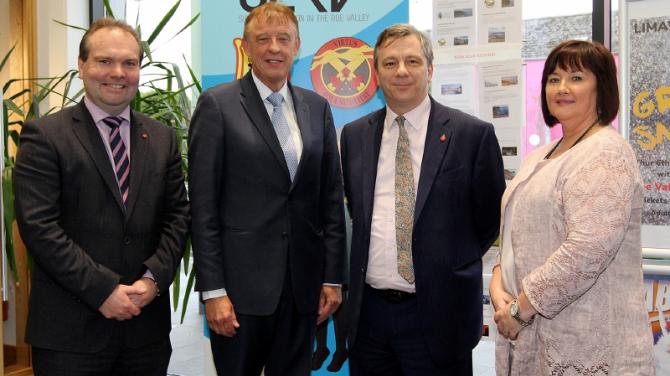 PLANS for a multi-million pound education project involving two schools in Limavady have been finalised, creating one of the first shared campuses in Northern Ireland.

On Friday afternoon (November 9) Principals and pupils from both St Mary's and Limavady High School gathered at the Roe Valley Arts and Cultural Centre (RVACC) to present the official launch of the Shared Education Roe Valley campus (SERV).

Pupils from both schools opened the ceremony in a joint choir with a powerful rendition of 'This is me' from hit musical, The Greatest Showman, performing to the relevant stakeholders who are playing a part in the scheme expected to enhance community relations.

SERV will involve the construction of a new STEM centre, a media and careers hub and a sixth form centre.

Over £8 million has already been invested in the project from Together: Building a United Community fund, the British government have also committed to invest 50 million per year for 10 years in order to develop these ground breaking educational facilities.

The funding, totalling £43m, will allow shared education campuses to be built in Limavady, Ballycastle and Moy.

The Shared Education Campuses (SEC) programme was launched in January 2014 under the Stormont executive's Together: Building a United Community initiative. In March 2016, six new schools were given money to provide shared education under the Stormont House and Fresh Start agreements.

The planning application for the campus was submitted to the Causeway Coast and Glens Borough Council in April 2018. Speaking at the launch, Principal of St Mary's Limavady, Mrs Rita Moore outlined the importance of shared education saying: “In the Roe Valley we know the true meaning of sharing. “We don’t pay lip service to sharing.

“ We share classes across the curriculum, in all subjects and provide opportunities for both students and staff to learn and work together

Mrs Moore continued: “We are two schools with our own unique cultural identity, we acknowledge our differences and celebrate them.