Royal seal of approval for Ballykelly 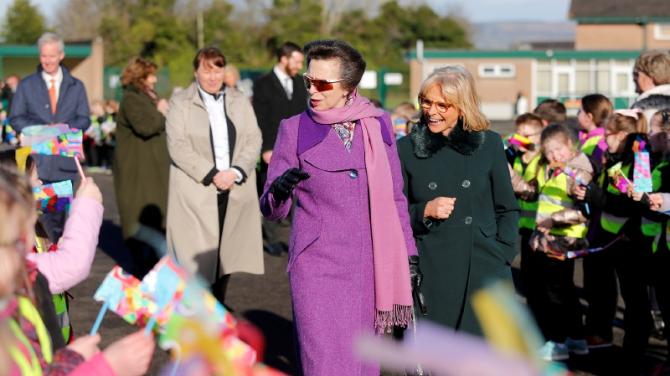 ON a whistle stop tour of the north west The Princess Royal was greeted by the children of Ballykelly Primary, as well as receiving a guided tour of the new £21 million DAERA building, last week.

After spending time with the children of Ballykelly Primary School, where she made a visit to a woodland area, Princess Anne visited the new headquarters of the Department of Agriculture, Environment and Rural Affairs (DAERA), in the village.

Excitement was high amongst staff as they took a well earned break to congregate in the lobby of the new building to meet the special visitor.

On arrival The Princess Royal was greeted by DAERA Permanent Secretary Dr Denis McMahon, who introduced HRH to DAERA staff during a tour of the state-of-the-art premises.

Dr McMahon said it was an honour to meet a member of the Royal Family.

Among those who also greeted the Princess Royal during the engagement was councillor Brenda Chivers, the Sinn Fein Mayor of Causeway Coast and Glens, and DUP MP Gregory Campbell.

The move to relocate DAERA to Ballykelly House was a flagship project and the first time a government Department moved its headquarters to a rural area, with the intention of stimulating rural economies.

Dr McMahon said: “DAERA was delighted to host today’s visit by The Princess Royal, where she met with staff, who explained how relocation has positively impacted on their individual work life balance, in addition to the key work streams that the Department has responsibility for delivering and the challenges we face.

“HRH made her way to the rooftop of Ballykelly House where she saw the eco-friendly initiatives utilised on the premises, such as rainwater harvesting, solar panels, a sedum green roof and swift boxes, which all promote green living and help conserve energy.”

Princess Anne enjoyed the fantastic view from the rooftop of the building, including the breathtaking landscape of counties Derry and Donegal on either side of Lough Foyle.