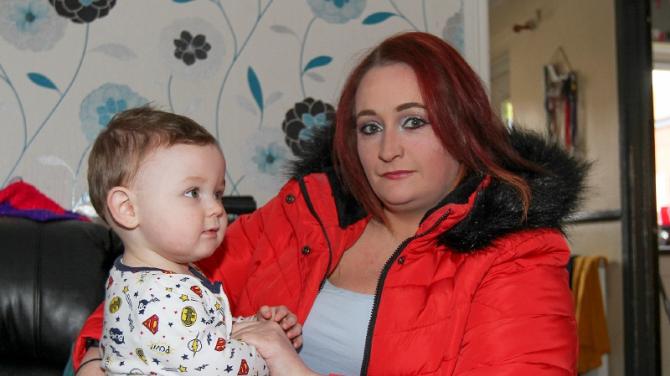 A LIMAVADY mother has expressed concern for local children after her four year old son discovered several bags of white powder during a recent visit to a play park in town.

Earlier this month, Brenda Moore received the shock of her life when her young son held up his findings which had been ditched in the tunnels at a local play park on Alexander Road.

Speaking to the Northern Constitution, the mother of five, who visits the park regularly with her children, recalled her disbelief at the discovery saying: “ There was two bags laying empty and two bags with white powder inside them.

“I was so angry because all I was worried about was him opening them.”

Following her panic, the four year old discarded the mystery bags, which had guns displayed on them, in the nearest bin.

She continued:“My son is just a typical little boy who might have thought this was a toy or something.

“I just kept thinking of what the outcome would be – even for poor animals too if they had of came across it.”

Following the incident, the horrified mother took to social media to alert parents in the area of the findings.

“I was just so upset as there are lots of other children who play in that park all the time and it is so close to Drumachose Primary School.

“I contacted the school to tell them what my son had found as I know the pupils sometimes go down there during the day with their teachers.”

According to Brenda, in recent years the local play area has become a target of vandalism and a common base for youths to meet up and hang around.

She continued: “It has been spray painted a few times and sometimes there would be broken glass from bottles they have thrown over the fence.”

Following her trip to the park which ended in fearing for the safety of her own children, Brenda has urged for a change within the local community in a bid to keep young kids safe.

“They just need to do something in that park – I don't even think the gates are locked at night.

“The people who left the bags have no consideration for others but themselves – I just can’t help thinking what if?”

Meanwhile, Alderman Alan Robinson, who was tagged in the social media post, alerted local police to the incident including the principal of Drumachose Primary School.

He said: “This is the third such time over recent years where Limavady has children who have picked up items with potential drugs inside.

“This play facility has been the subject of a litany of anti-community problems with frequent calls for it to be locked and for fences to be raised.”

“With several organisations, including the Police now made aware that our play parks are not even sacrosant to drug users, we also call on parents to have heightened vigilance in the vincinity of Backburn Path and to ensure prompt reporting to the authorities or to elected representatives.”