BHF Limavady praised for raising over quarter of a million pounds 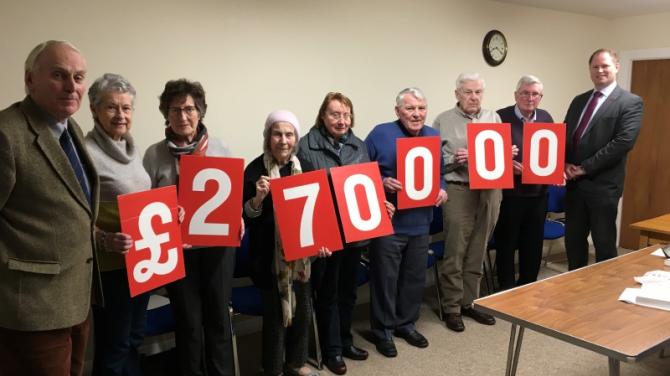 THE Head of British Heart Foundation Northern Ireland (BHF NI) has paid tribute to a Limavady group who have been raising funds for heart and circulatory disease research for more than three decades.

The Limavady BHF NI fundraising branch is set to close this week after 32 years raising money for the charity.

The group will continue with their yearly Limavady street collection in August but will formally close as a branch.

Over the past 32 years the group has raised an astonishing £270,000 for lifesaving heart research through a range of fundraising events and activities.

Acting Head of BHF NI James Cant paid tribute to the group at their AGM this week and presented members of the group with a plaque to mark their efforts.

Chair of the Limavady BHF fundraising group Harry Boyle has been a member since 1987 and said: ''Back then there were about 15 of us who joined as founding members under the new BHF Director for Northern Ireland Peter Welsh.

“After 32 years we have made many friends and there has been a lot of camaraderie.

“We are now taking a change of direction and although we will still be doing our annual street collection, we are winding down as a Branch because of the difficulty of recruiting younger members.

“We are very proud to have raised £270,000 to help fund lifesaving heart research and wish to thank all former members for their support and also all the local shops who so generously helped us with raffle prizes and donations.”

Acting Head of BHF NI James Cant paid tribute to the group and their three decades of hard work and dedication: “It is a privilege and a pleasure to be with the Limavady BHF fundraising branch as they mark 32 years as fundraisers.

“The branch really are the unsung heroes of BHF NI who have been out in all weathers shaking buckets on the street, using their own homes for fundraising events and inspiring their local community to dig deep and raise funds for our work.

“Over the past three decades BHF research has found the genes linked to inherited heart conditions that can cause sudden death, we have discovered a new test that diagnoses more women with a heart attack leading to quicker and better treatment and have discovered that a simple blood test could transform heart failure diagnosis.

“It is thanks to groups of passionate supporters like the Limavady branch that we have made these amazing discoveries.

“We can’t thank them enough for everything they have done for us and the difference they will have made for patients across Northern Ireland.”

One in four people die from heart and circulatory diseases in Northern Ireland, but you can help beat heartbreak forever by forming a fundraising group.