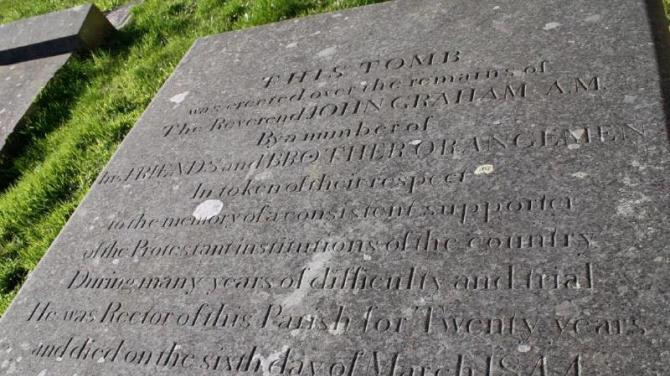 NEXT year marks a centenary since noted historian, author and poet Reverend John Graham was promoted to Rector of Tamlaghtard, Magilligan.

A very early member of the Orange Order, Rev Graham was a colourful character.

Part of his story will be told in a forthcoming book that Fiona Pegrum and Aaron Callan are currently researching and writing on the history of Tamlaghtard Church.

The offer also included a contribution of a number of Rev Graham’s books made by his great granddaughter Mrs H Pearl Adams, a journalist of the Sunday Times and Observer.

In 1960 the Belfast Telegraph reported that that plans were being made to open a Derry Siege Museum and the Apprentice Boys’ Order had a number of important relics in storage including “an oil painting of Rev John Graham, a great Protestant and Orangeman who was rector of Lifford and also Tamlaghtfinlagan between 1820 and 1830 and who was a noted writer on the Siege.”

Unfortunately the Apprentice Boys’ museum no longer holds the painting and a suggestion that it was borrowed for an exhibition at Monreagh Heritage Centre years ago, has not produced a result.

Does anybody know the whereabouts of this oil painting or any other images of Reverend John Graham?