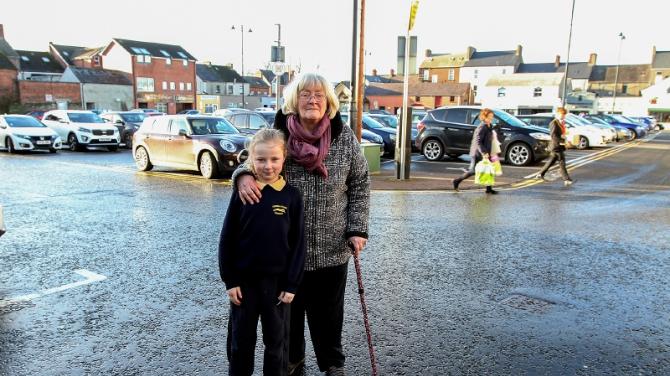 TRADERS in Limavady have expressed “disgust” at the state of footpaths and car parks during the extreme weather conditions earlier in the month.

Speaking to the Northern Constitution, Lucille Brolly, owner of Lucille's Tea Room in Newtown Square, said she felt like a prisoner in her own cafe as temperatures dropped leaving walkways icy and dangerous.

Lucille has hit out at the Council for not adequately gritting and salting the car park and footpaths.

Causeway Coast and Glens Council told the Northern Constitution it has an arrangement with the Department for Infrastructure (DfI) to make town centre car parks safe, as part of the gritting operation.

The Council also confirmed that DfI had gritted the car parks in Limavady, according to records.

A spokesperson for the Council said: “Council have an arrangement with DFI Roads Service to grit the main town centre car parks as part of their roads network gritting operation.

“DFI retain records of all of their gritting operations and confirm that car parks in Limavady were gritted during the recent spell of winter weather.”

A Department for Infrastructure (DfI) spokesperson said: “Causeway Coast and Glens Council are responsible for the operation of the Newtown Square car park in Limavady.

“Following an approach from the Council, the Department agreed to salt the main route through this car park as part of its primary gritting schedule.

“This is a trial for the 2018/19 winter season, being carried out on a rechargeable basis and will be subject to review.

“The car park at Newtown Square has been treated on a number of occasions this year.”

Lucille Brolly still believed not enough was done. She said: “I was disgusted at the state of the car park and the footpaths.

“The council seemed to not have cleared the ice and snow away so people can get to work safely.

“I was shop bound and my staff had to help me in and out of the car.

“I seen a lot of people slipping and falling which was really frightening. One young fella slipped and fell cutting his face.

“It's not acceptable and not safe. If another cold snap comes in are we to all sit at home because the pathways and roads have not been made safe?”

“Traders in the Town Centre received many reports of falls, indeed some quite serious.

“Customers have also been asking why pavements nowadays remain covered in slush and ice rather than being cleared by traders or the authorities.

“In the past clearing snow and ice from the front of premises was the norm.

“Indeed individual businesses took pride in clearing the snow and ice from the front of their premises with little delay after snow and ice affected them.

“Salt was sometimes provided by Council if it was a long freeze, otherwise businesses provided their own and the manpower.

“All this changed when rumours got about that if you interfered with snow and ice on the pavements, you were interfering with what was an “act of God” and would therefore be liable if anyone fell.

“Many traders then stopped clearing the pavements for fear of prosecution but some carried on and still do.

“It would appear that there is still confusion on this issue and a statement from the Council is needed to once and for all clarify the position regarding clearing of pavements and pedestrian walkways and indeed to identify who is responsible for making Car Parks safer during periods of extreme weather.

“Perhaps this is a topic the new Town and Village Management Team will consider when consulting with the other Chambers during their forthcoming 'lets talk town centre' meetings which are going to be held throughout the Borough in February.

One business owner commented: “Over a period of time it became normal practice not to clear or tamper with the pavements, much to the detriment of the town centre customers, especially the more elderly who fearing a fall and its implications for their wellbeing do not venture either up or down the town.”