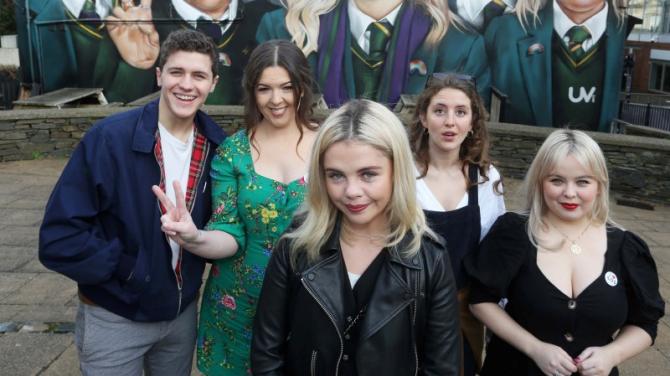 A LOCAL man who stole catering equipment from a recent Derry Girls premiere event has been jailed for four months.

Adam Raymond McDaid (24), formerly of Limavady, who gave an address of Bonds Hill in the Waterside Area, pleaded guilty to stealing £1560 worth of equipment from the function in the city's Guildhall last Monday night (February 18).

Derry Magistrates Court heard that McDaid, who has 141 previous convictions, was drunk and dressed as a caterer when he stole from a trolley belonging to Posh Nosh catering company during the premiere of the second series of the popular Channel Four show.

It was understood that guests at the party pursued him, and when he sought shelter in a disabled toilet in Star Bingo, they guarded McDaid until the PSNI arrived.

Derry Magistrates Court heard that McDaid had only been released from prison on licence three weeks ago.

McDaid also admitted to stealing a blue BMW jacket, a toolbox, and knives before headbutting a police officer in the face after his arrest for the theft offences.

District Judge, Mr Barney McElholm told the court he had been dealing with McDaid since the defendant was a 12-year-old boy.

Mr McElholm said: “One thing that is quite clear is that when he is out of custody he will re-offend.

“If there was any prospect of turning him around I would consider it but there is nothing in his behaviour to convince me he has arrived at that point.“He was released just three weeks ago and he again re-offends.

“It is fortunate for the catering company that all of the stolen items belonging to them were recovered and fit for use.”