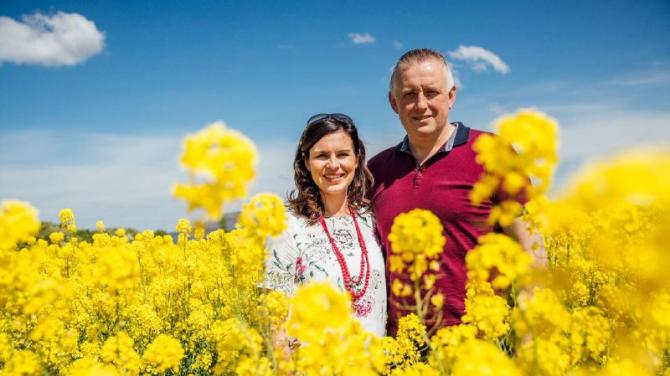 A FARM-BASED family business from Limavady are over the moon following the recent launch of their award-winning rapeseed oils at a high-end department store in London.

After nearly a year of much hard work and dedication, Broighter Gold Rapeseed oil, owned by Richard and Leona Kane, managed to grace the shelves of Liberty London last week.

From cold-pressed, to zingy lemon and intense garlic to hot chilli, these four premium rapeseed oils are now set for success in the big city.

Under their joint leadership, the business has grown into one of the UK's best known and loved rapeseed oil suppliers with their top quality products also being sold in stores, used in top restaurants and hotels throughout Ireland.

Speaking to the Northern Constitution, Leona explained her initial disbelief when a consultant from Liberty London got in touch with the local family.

She recalled: “They contacted me last year to see if we would be interested in bottling a few products.

“At first, I thought it was spam or a joke so I researched the company and much to my delight, discovered it was genuine.

“We had to figure out numbers and what they would be looking for so once we established what we were doing, we got to work with the company.”

Following the great news, the devoted couple began working alongside commercial printing company, Nuprint, based in Derry, in order to get the approaching products ready.

Leona continued: “They helped us to get the products ready to go and we had them sent off in January to be created.

“We worked together with Liberty and they ended up doing the branding for us -they were great to work with and a lovely company.”

Leona went on to praise the company further saying: “They sell hundreds and thousands of different high end products, they have a huge following and there is also a lot of tourists who visit their store, so for us to create a product for them, it is just so unique.”

Broighter Gold Rapeseed oil, was discovered by accident one evening in 2006 when the couple had run out of olive oil so decided to use some of their unfiltered cold pressed rapeseed oil.

Their business was officially launched in 2010.

Diversifying their natural product of cold pressed rapeseed oil and turning it into a premium vegetable cooking oil, for all to love and enjoy, has taken the family on a personal journey they never could have imagined.

Following the launch of their new products in London and their recent stint on UTV show,'James Martin Great British Adventures,' Leona believes the family could not have asked for anything better.

“At the end of the day, as a farm in Limavady, we are really proud to get this recognition,” she said.

“We have people getting in touch with us from all around the world and it's not just putting our product on the shelf, it's also putting Limavady on the shelf too and it has brought money into our local economy.”

“We have been getting hundreds of orders to the point where we've had to work overnight to get the products sent out but we are really lucky to have a brilliant team – the whole experience has just been phenomenal.”