Robinson and McGlinchey top the polls 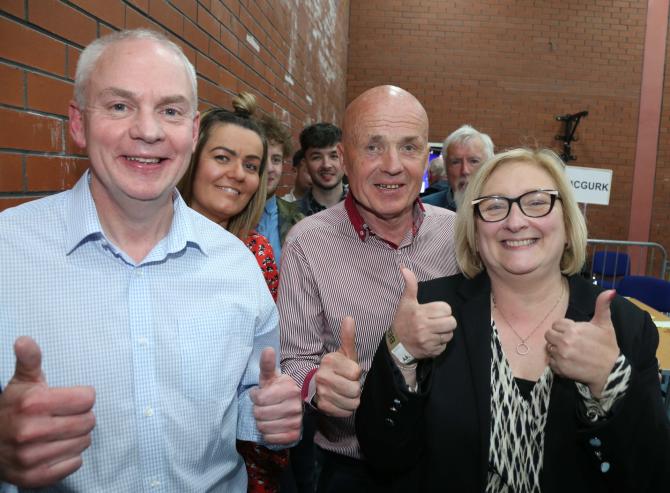 FEW were surprised when the DUP’s Alan Robinson topped the poll in the Limavady DEA.
The son of sitting MLA, George Robinson took 1498 votes, easily eclipsing runner-up Brenda Chivers of Sinn Fein.
“Personally I’m really humbled and utterly delighted,” said Mr Robinson.
“Never in my wildest dreams did I think I would maintain and increase the vote that I had in 2014.
“I have done so based upon the team that I have guide by my father George Robinson - a humble little man, a man who was a sole DUP councillor for many years on Limavady Council and has assisted us hopefully allowing us to take four seats across the Limavady DEA.”
Mr Robinson said his priorities next term would remain the same as they'd always been - “the people of Limavady.”
Overall, it was a good day for the DUP in Limavady.
The party retained the two seats it won last time around plus that of Aaron Callan who ran in 2014 as an Ulster Unionist before defecting mid-term.
Sinn Fein's Brenda Chivers saw her vote significantly raised, perhaps via her profile as last year’s mayor.
“We do the work on the ground and the people have seen that,” she told the Constitution.
“When we went to the doors it was local issues that were brought up.
“I went everywhere I was asked and I was treated very well no matter where I went.
“And I’m going to continue on being a councillor for everyone - I was mayor for everyone, and I am going to be councillor for everyone.”
Following the departure of John Deighan, who stepped down to concentrate on work commitments,  the SDLP’s replacement candidate Ashleen Schenning filled the DEA’s fifth and final seat.