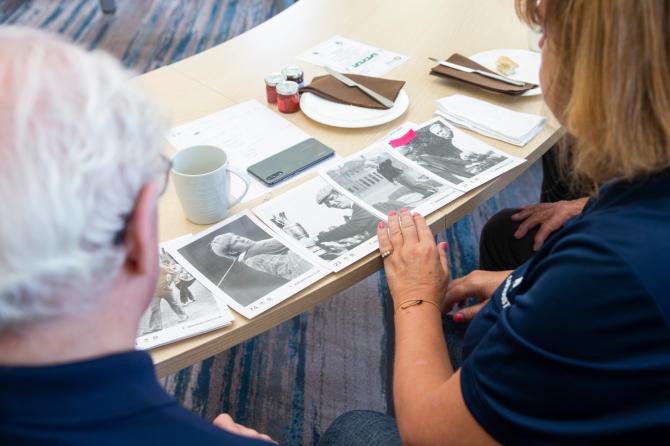 Royal Portrush, the venue for The 148th Open this summer, is to host a Golf Memories meeting as the club looks to use its rich history to help improve the lives of those with dementia.

The event plans to involve both club members and the public to celebrate their memories of playing and watching golf on the North Coast.

Using past photos and memorabilia – including The Open when it was last played at Royal Portrush in 1951 – individuals are invited to come along and share their recollections and talk about their passion for the sport with other golfers.

Hannah Fleming, Museum & Heritage Assistant Curator at the British Golf Museum in St Andrews, has helped drive the meeting, having set up a new monthly social group at the Museum for people living with dementia and memory loss at the end of last year.

The Portrush initiative builds on the work in Scotland, notably at golf facilities including Carnoustie, Dumfries and Noah’s Ark in Perth. They are part of the overall Golf Memories Project, which is part of the wider Sports Heritage Scotland network, helping stir memories among people living with memory loss or experiencing other related forms of social isolation.

“The Road to The Open schools’ tour is taking place in Northern Ireland from 13 – 17 May and we will be sharing the story of golf’s oldest Major to pupils from Portrush, Coleraine, Derry/Londonderry, and Belfast,” explained Hannah.

“We therefore felt it was also a good opportunity to hold a Golf Memories meeting at Royal Portrush, with Secretary Manager Wilma Erskine kindly agreeing to host us. It will follow the model set out by the memories meetings that we run at the Museum but will have a focus on Portrush’s history.”

The meeting will take place in the Skerries Room of the Royal Portrush Clubhouse on Tuesday 14 May at 11am and is open to club members and the public.

Roger Anderson, who is the author of a new book on the history of Royal Portrush due to be completed after The Open, will also be in attendance. Anderson, who has gathered images and stories of the club and will be showing them on the day, has also invited a local social historian, Nina McNeary, who will be able to share stories of Portrush and the surrounding area.

Lisa Hendley, a Group Co-Ordinator for The Alzheimer’s Society within the area, is also inviting people living with dementia who have a keen interest in golf, The Open and Portrush history.

“The meeting will be a friendly and informal gathering for people who wish to share their memories with us,” added Hannah. “It would be wonderful to meet anyone who has recollections of The Open in 1951, or who had family members who witnessed Max Faulkner lift The Claret Jug.

“The ideal scenario would be for the meetings to continue and Golf Memories becomes a project which is taken up by Royal Portrush as a regular event. We hope there is enthusiasm for the event and look forward to the meeting on 14 May.”

The Golf Memories meeting is open to anyone living with dementia and their carers/family. People can either attend independently or bring a companion where support is needed. The meeting will last around 90 minutes and refreshments will be available.

For further information and to book a place, please contact Hannah Fleming via email hannahfleming@randa.org