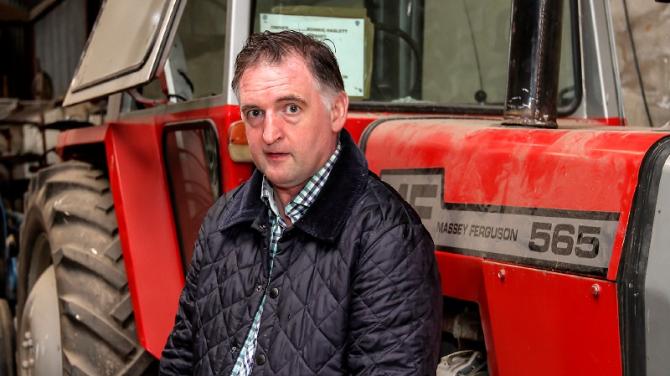 A CLAUDY farmer who suffered near fatal injuries after being overcome by slurry gas is raising funds for NI Air Ambulance, a medical service that saved his life after the traumatic incident which occurred last year.

On June 16 2018, what seemed like a typical day working on his family farm, quickly turned into utter tragedy for George Haslett who collapsed while attempting to rescue lambs from a shed after he mixed hen slurry.

Fourty four year-old George was rescued by his father Ronnie and neighbouring farmers after the alarm was raised by 13-year-old Timothy Lynch who had been helping on the farm that day.

“I had lambs in the shed and I should've put them out before I mixed the slurry but the fumes got me before it happened,” recalled George.

Following the accident, doctors told George's wife, Ashley that chances of his survival were very slim.

Now, eleven months later, George who also has a 15-year-old son, Matthew, is, “thankful to be alive” as he organises a charity tractor run which is set to take place in June.

Despite the fateful accident, which has left him with a brain injury, George still regards himself as very fortunate and has managed to walk and talk once again after months of rehabilitation.

He told the Northern Constitution: “The doctors told me it's a miracle for me to be alive.

“My speaking has slowed down and at one time I couldn't, so I'm very fortunate I can speak at all today.

“I am using a walking aid at the minute and I use my wheelchair if I'm going long distance – I can walk but it's just my balance and stability isn't great.”

George continued: “I organised a tractor run because I just want to give back for what I received.

“I want to give back to the health service too for keeping me in hospital for nine months and for the care I received and even now after I'm out – I owe a big debt to them.”

Despite his life-changing injuries, inspirational George, who also worked as a contract manager in Castledawson before his accident, is determined to recover and get his life back to normal again.

George explained: “I worked all my life but now my life has changed big time.

“I lost my driving license because of the injury but if the doctor is satisfied enough with my recovery then I can apply for it again next month.”

He concluded: “Nobody is promising me that I will be OK but I really hope to make a good recovery.”

Registration for the event is from 12 noon and the tractors will set off at 1pm sharp from Banagher Presbyterian Church.

It is £20 per tractor and light refreshments will also be included.

There will also be a charity auction on return and everyone is welcome.