Going the extra mile to give Noah a Helping Hand! 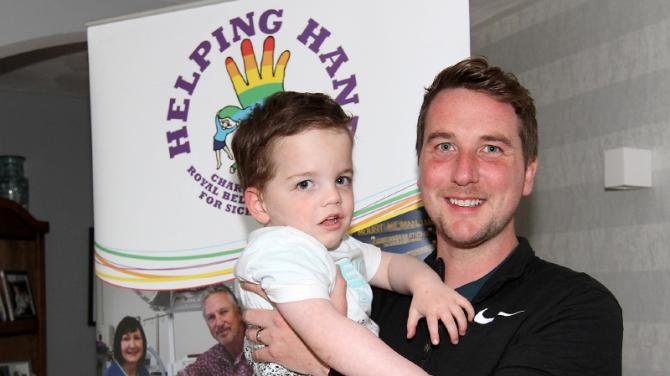 DEDICATED Limavady couple Kristofor (Kris) and Jill Mayell have this week confirmed a series of challenges they are undertaking within the next year as they step out and step up their fundraising for the Helping Hand Charity.

Hydrocephalus is a condition in which an accumulation of cerebrospinal fluid (CSF) occurs within the brain causing increased pressure inside the skull.

Noah has spent a lot of his short life on different hospital wards, leading to eight operations, and a list other procedures.

Now he has a ‘shunt’ fitted to drain the build up of fluid on his brain. His day to day difficulties include severe epilepsy, of which he has five different forms, requiring constant monitoring and medication.

In meeting with Kris and Jill it is immediately obvious the dedication and love they have not only for Noah, but also for their three other young sons, Benn, Jamie and Lucas.

Whilst Jill is Noah’s primary carer, daily administrating the life saving medicines he relies on, dad Kris balances care for Noah and his three siblings with a full time job, and training for a number of fund raising challenges.

When we met on Saturday morning this weekend Noah had just been allowed to return home after four weeks in the Royal Hospital, inspirational Noah was in great form, obviously delighted to return home and to his own bedroom, which he loves, breaking into a huge beaming smile as he gave me a ‘high five’.

Speaking to the Northern Constitution mum Jill said “the treatment the NHS have given Noah is brilliant”, and continued ”whenever Noah’s regular medication is not able to control the epilepsy and he has to go into hospital, the staff are always there to meet us instantly reassuring me he will be fine, and they stay with him 24/7 throughout his time in intensive care.”

It is typical of the devoted couple that Kris and Jill are that they feel a debt of gratitude to the NHS staff and to the charity Helping Hand that this week they are confirming a year of fundraising in which Kris, who has previously ran three Marathons.

Not to be left out Jill, this year will swim one mile each day throughout July until she completes the 26.2 mile marathon distance, and then round that off with a marathon distance walk from the Coleraine mountain road to finish on the peace bridge in Derry/Londonderry.

Kris and Jill are no strangers to fundraising, in 2017 following various fundraising events held by them with their family and friends, who are collectively and affectionately known as TeamNoah, were able to present a cheque for  £10,000 to the Helping Hand charity, which purchased two Blanket Rol systems for the PICU (Intensive Care Unit at the Royal Hospital).

Kris and Jill are quick to recognise the generosity of everyone who have supported them in the past.

Kris said: “People in Limavady and all over have been so good before.

“It is heartbreaking seeing what children and their families go through on a daily basis, we are so grateful to everything that has already been done for Noah.”

Kris and Jill have a just giving page set up for donations at - www.justgiving.com/