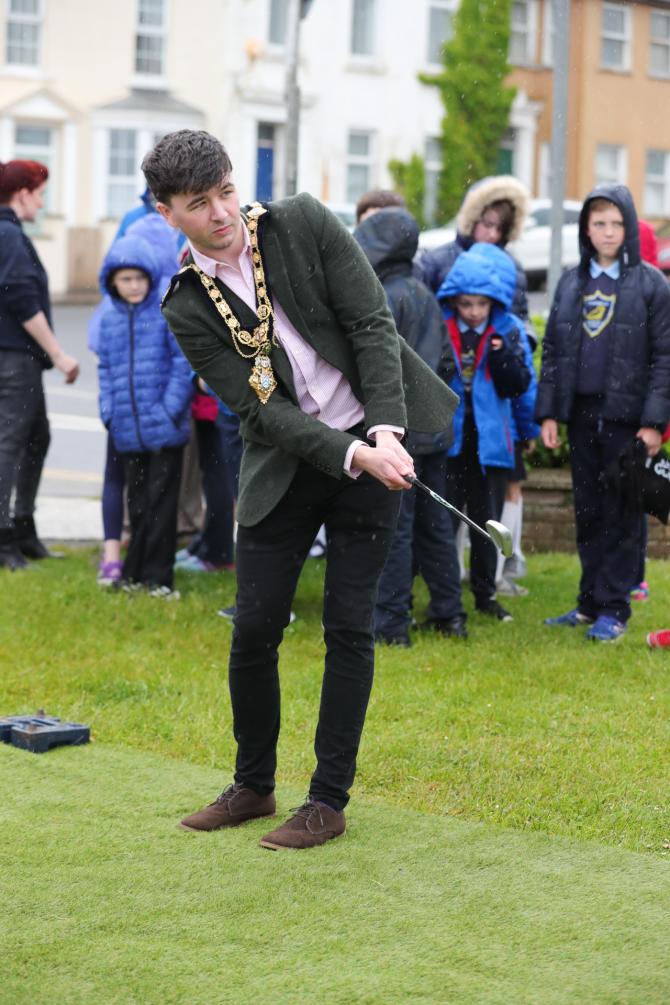 PEOPLE from across the community including schools, golf clubs, tourism industry representatives and sports stars have joined together to celebrate the return of The 148th Open Championship to Northern Ireland for the first time in almost 70 years.

Tourism NI’s community event, The Epic Journey to The 148th Open, rolled into Portrush on Thursday on the sixth stop of its 500-mile journey.

The community got involved in the buzz and civic pride surrounding golf’s most prestigious championship coming to Northern Ireland in July, snapping pictures and videos of Tourism NI’s giant #TheOpen letter sculpture made from 4,000 golf balls.

It is truly an epic year for Northern Ireland tourism as The Open at Royal Portrush will be beamed live to over 600 million households across the world. It is set to attract more than 215,000 eager spectators, with a team of 6,000 staff and 350 volunteers warmly welcoming visitors. Unprecedented demand from fans wanting to attend The Open has led to record-breaking ticket sales and the Championship will be a sell-out on Championship Days for the first time.

Leanne Rice, Golf Marketing Manager of Tourism NI, said: “The 148th Open is the biggest sporting event that Northern Ireland has ever held. We are delighted to be able to bring a part of it to communities within NI and celebrate its return. The Epic Journey engages the community and golfing fans alike, with the opportunity to win coveted tickets to The Open at each stop. The County Antrim stop of the journey is very special, a teaser of what we can expect as we all look forward to returning to Portrush in July.

“We are also partnering with Sport NI, golf clubs and councils at each Epic Journey event to drive interest and participation not only in golf, but also in all sport to ensure that hosting a major global sporting event offers a lasting legacy for many years to come.”

The Mayor of Causeway Coast and Glens Borough Council, Councillor Sean Bateson, said he was delighted to welcome The Epic Journey to the heart of Portrush: “We have enjoyed a great morning of celebration as we are now on the countdown. There was a clear sense of excitement at what lies ahead, and it was inspiring to see so many young people from across the area embracing this unique experience with such enthusiasm and eagerness. The Open is set to showcase Portrush and the wider Causeway Coast and Glens area on a global stage and we look forward with much anticipation to hosting this momentous occasion and enjoying the long term legacy it will leave.”

The County Antrim stop of The Epic Journey to The 148th Open tour brought Darren Clarke’s Claret Jug from his win at Royal St George’s Golf Club in 2011 to the event. Also featuring was a giant #TheOpen letter sculpture, designed by Tourism NI and made out of 4,000 golf balls, which was unveiled by global golfing hero and Champion Golfer, Rory McIlroy, last October.