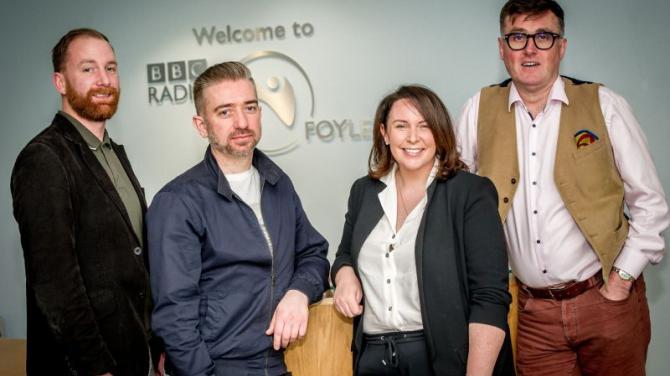 BBC Radio Foyle is set to hit the road for a series of special summer broadcasts across the North West which includes Limavady town.

As BBC Radio Foyle continues its 40th birthday year, the station celebrates communities, past, present and future, as the Foyle team will be out visiting Limavady, Strabane and Londonderry.

Beginning on Tuesday June 25, Elaine McGee presents The Breakfast Show live from the Roe Valley Arts Centre in Limavady from 7am.

Later in the day Mark Patterson brings his show from the centre from 1.30pm, followed by Stephen McCauley at 3pm.

On Wednesday 26 June, Sean O’Halloran broadcasts live into The Breakfast Show from the Alley Arts Centre in Strabane; with Mark Patterson and Stephen McCauley bringing their respective programmes from the venue later in the day.And on Thursday June 27, Elaine McGee is in St Columb’s Park House, Derry for The Breakfast Show, and Mark Patterson and Stephen McCauley will also be live from there in the afternoon.

Throughout the three days the presenters will be meeting local people, listening to their stories, hearing live music and looking back into BBC Radio Foyle’s rich archive with stories connected to the areas.

Elaine McGee and Sean O’Halloran said: “Our listeners have been the most important part of Radio Foyle for the past 40 years and they play a huge part in shaping the Breakfast Show, so it’s great to get the opportunity to come out of the studio and into the communities. “Local stories and the people that share them with us is what our programme is all about – and we’re really looking forward to hearing and reflecting what’s on our listeners’ minds.”

Stephen McCauley said: “I’m extremely excited about escaping from the studios for a few days to take the show on the road.

“We don’t get to do this that often so we’re going to have some live music, guests and, hopefully, it’ll be a chance to catch up with some of our “Themesters” in person so don’t just listen at home, at work or in the car, come along, say hello and be part of the show.”

Mark Patterson said: ““We’re on the road! Our 40th anniversary is all about our community.

“The amazing history and culture of the North West.

“The celebrations and challenges.

“The new stories. “People living their lives in a thousand different ways.

“Please feel very welcome to pop along to Limavady, Strabane or the Waterside later this month.

“We’ll even bring the buns!”

The programmes will also be available via BBC Sounds.