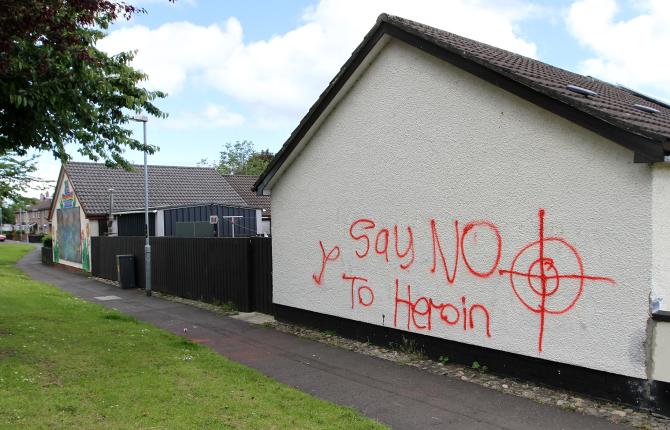 TWO councillors have condemned recent graffiti spread on the side of a property on the Ballyquin Road in Limavady.
It is believed the graffiti, which reads 'say no to heroin' appeared on the side of the home in Glenlea Park  in the early hours of Friday morning (June 14).
DUP Alderman Alan Robinson said, “The irony in the graffiti artist in this case is that if he or she is concerned at the criminality of heroin use or heroin dealing, that he/she had no such qualms about the criminality of defacing someone’s wall, a wall that the taxpayer will now have to pick up the tab to repair.”
He continued: “The appropriate way to address concerns regarding heroin is by passing information and evidence to both the Police and Crimestoppers, the competent authorities tasked to deal with such issues.”
Sinn Fein Councillor Brenda Chivers also condemned the recent graffiti saying: "Drugs cause misery in our communities and have blighted many lives.”
She continued: "I would encourage anyone with information on the supply of illegal drugs to bring it forward to the PSNI.”
This is not the first time the gable wall in Limavady has been targeted.
Three years ago, police were investigating after the statement “Touts need shoot?” was daubed on the same wall.