Brenda puts her 'stamp' on the Borough 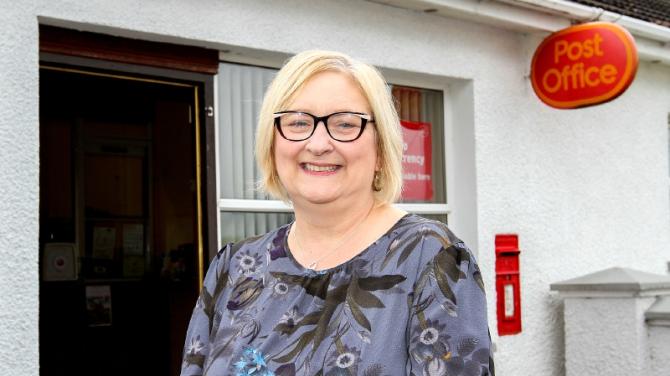 FORMER Mayor Councillor Brenda Chivers has looked back on a year of “pride and privilege” as the first nationalist mayor of Causeway Coast and Glens.

The Limavady councillor’s tenure as Mayor ended in May after the local elections, but Brenda looks back with pride on her mayoral year.

Newly elected party colleague Sean Bateson was elected as the new mayor of Causeway Coast and Glens, ending a run of four female mayors of the Borough.

Originally from Belfast, Brenda moved to Canada aged 17. She met her husband Liam in Canada and had four children.

The Chivers family moved home from Canada, the year of the ceasefire, to manage Liam's fathers farm.

Brenda took over as Postmistress 15 years ago in Drumsurn post office which has been in the Chivers family for over 60 years.

Grandmother to six grandsons all under the age of five, the Causeway Councillor has her hands full but loves when they all get together. One of her grandsons lives in Canada, but FaceTime keeps the Chivers' connected.

An active member of the community, Brenda is a founding member of Drumsurn Community Association, and always pays tribute to the committee for their continued dedication.

Looking back on her mayoral year, Councillor Chivers reflects on her highlights and achievements.

What did it mean to be the first Sinn Fein Mayor of CC&G Council?

It was a great honour and privilege to be selected to represent the council as the first Sinn Fein Mayor.

It allowed me to represent the nationalist/republican community where they have been under represented before.

I hope I showed others that they have nothing to fear of a Sinn Fein mayor.

It also allowed me to reach out to the whole community and I hope I did that in my 'Mayor for all' promise.

What did it mean to be the Mayor of the borough?

It made me proud to be able to raise awareness to the minority groups within our council area, eg the LGBT community, local disability groups and many other charities.

I was very proud being Mayor in the run up to the biggest event to be held in our council area in many years.

The Open coming to Portrush will be a brilliant opportunity for us to showcase our magnificent area, for me to be part of the pre-publicly of the event was both exciting and memorable.

What was your biggest achievement as Mayor?

Being able to raise much needed funds and awareness for TinyLife, my chosen charity.

As my two eldest grandsons were born premature my son and daughter in law benefited from the charity I wanted to give a little back as a way of saying thank you.

What were your highlights of the year?

I had many highlights; from being invited to a 103rd birthday to being able to hold most of the sporting cups, like Sam Maguire and the three rugby cups, and of course the Claret Jug.

For me the most important highlights was meeting the clubs and groups that do so much for our community, with so many dedicated volunteers from across the borough involved with these clubs.

Before my year was up I wanted to pay tribute to the emergency services, especially the volunteers.

So, I visited or I held receptions in the Mayors parlour for many of these valuable services.

On one occassion I held a reception for the coast guards across our beautiful section of coast who put their lives at risk to keep our shores safe I also went out to Red Bay to see first hand how they operate.

How did you feel to represent Limavady?

I am certainly proud to be elected again to represent the Limavady DEA.

We lived in Mounteden for seven years before moving to the family farm in Drumsurn our children all attended school in Limavady so its what you would say ‘our town.’

We are very lucky to live in a very unique part of the council area, with seven miles of amazing beaches, breath taking scenery and a great shopping town that offers a wide range of shops.

I believe there is a lot more to be done to promote our town in terms of tourism and inward investment.

I am keen to promote the area as the home of Danny Boy, and I think we have a great brand we should be selling to the world.