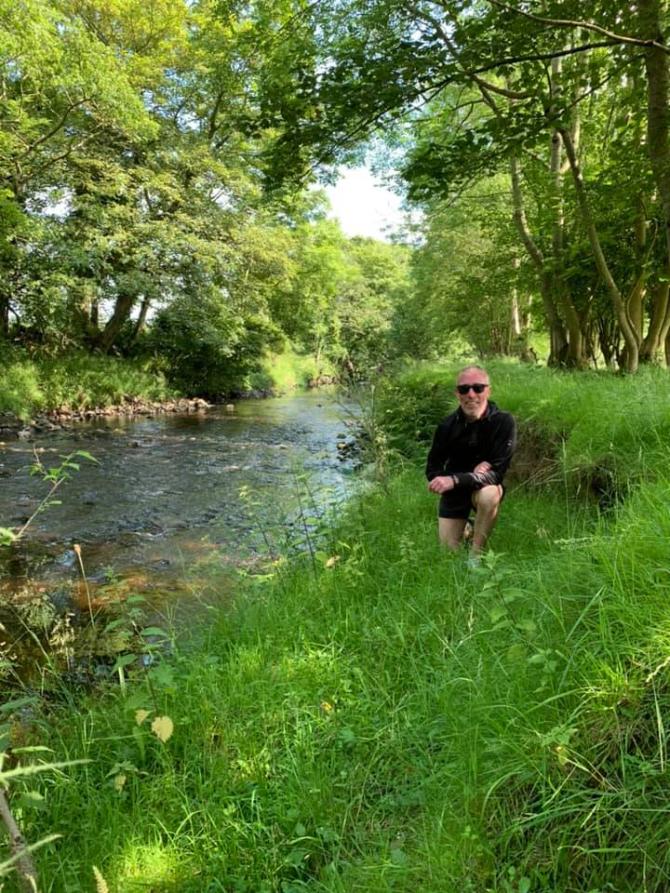 A WEEKEND under the stars has made one well-groomed Limavady hairdresser appreciate what he has, while raising money for three worthy charities.
JJ Johnston challenged himself to live off the land, last month, in a bid to connect with nature and raise money for three charities close to his heart.
A man well-known for his dapper appearance, JJ ventured into the Garvagh wilderness armed with only a tent, a fishing rod and a few basic supplies hoping to raise funds for LIPS, NI Children's Hospice and Foyle Hospice, in July.
Hoping to reach a target of £300, generous JJ has so far raised a whopping £850 for his chosen charities.
Reflecting on his four day retreat a grateful JJ returned home on July 16 with a new outlook on life, he tells the Northern Constitution of his wild experience.
Day 1
JJ started off by leaving all his worldly possessions at home and setting of to pitch his tent.
On arrival he pitched the tent and sorted a fire pit after a very informative talk with Rodney (the land owner) about what plants on the land are safe to eat and used for making flavoured tea or cooled water.
Once all was set up it was time to fish and try to catch dinner. It wasn’t long before JJ got a bite and managed to catch a fish big enough for eating.
JJ walked four mile up the river to visit all the old spots and pools his father used to fish this managed to set a slight emotional roller-coaster in motion for JJ revisiting all the places where he grew up. He said: “I have such happy memories of my Dad, my idol in life, teaching me how to fish.”
Day 2
Following a really rough first nights sleep, JJ soon noticed the cold and lack of home comforts difficult, not to mention adjusting to the noises outside.
When he finally gave up on the idea of sleep he found himself very emotional, tired, humbled and also thankful. Thankful for all he had in life.
He was thankful he had the tent over him and a fishing rod to at least catch dinner which he realised that morning is way more than any homeless person would even have to help them through the long cold nights, “I felt like a rich homeless person because at least I had a tent and fishing rod.”
All these emotions mixed with the memories of his late father left him a bit bewildered, he had to gather his emotions and get his head in the right place to maintain the motivation to get up and keep going with the challenge.
JJ got moving and ventured into the overgrowth and over fields and fences to explore his wild surroundings, the fishing continued throughout the walk and he managed to come home with two fish, a few potatoes and some peas and wild mushrooms.
A very successful days foraging and fishing!
The evening was spent by the fire cooking his food and relaxing while listening to nature and thinking about life.
He said: “We are so spoilt with all we have in life, the things we take for granted so very often, all the luxuries of homes, cupboards full of food, our families and we really don’t appreciate half often enough how well off we actually all are!”
Day 3
As sunrise began JJ was closer to the end of his challenge, which give him a morale boost and without hesitation was straight up and away to the river to begin his morning fishing.
The sun came out making it all feel a little brighter and warmer as well.
JJ got a welcome visit from some of his old friends as they reminisced about old times fishing the river.
Always the one to keep up appearances, JJ decided it was time for a wash, with the sun out and the weather warmer he felt more comfortable venturing into the water for a refreshing and cleansing dip to try sort out his wayward hair and get some normality about his appearance again.
Feeling the water just splashing over him awakening and refreshing him, JJ got set to relax by the river bank. It had been a busy few days, coupled with the difficult sleep, the charity camper retreated to his tent and fell asleep early evening.
Day 4
JJ hadn’t slept since he woke during the night, but he got on the move as he started to pack up his few belongings and take down the tent, in preparation for his return to 'normal' life.
He refilled the fire pit hole and returned the land to its original natural state.
Once everything was packed he headed down to the river for his final day of fishing.
Arriving home later that day JJ seen his 'rabbit hutch' home as he used to call his house in a new light. It was now more like a castle compared to what he was used to that weekend.
A reflective JJ said: “Everyone should take the time out to live like I did even if it’s just for one night to help them appreciate all they have in life.
“Even take five minutes outside and look up at the sky before returning to your luxury and technology filled worlds with the thought of how lucky we are to have what we have!”
JJ is still accepting donations at JJ's House of Hair on Irish Green Street, Limavady.