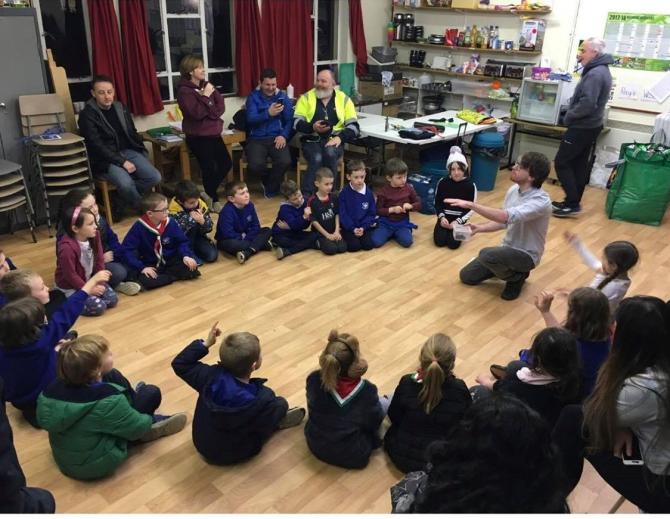 A DEDICATED scouting group in Limavady, who have served the community for over three decades, are on the hunt for new leaders to lend a helping hand and to provide adventure and endless opportunities for youngsters to reach their full potential.
In 1981, the 25th/28th Derry Scouting Ireland (Limavady) was founded by Parish Priests Father Irwin and Father Donnelly along with the help of Brian Mc Williams, Kevin King and Brian Mc Closkey.
The organisation is independent,
non-political, and open to all young people without distinction of origin, race, creed, sexual orientation, spiritual belief or gender, in accordance with the purpose, principles and method conceived by Lord Baden-Powell.
According to Group Leader, Mary Owens, the group, who meet weekly, are going from strength-to-strength each year but ar now in desperate need of leaders who will help continue this success.
Mary explained: “The aim of the organisation is to encourage the social, physical, intellectual, character, emotional, and spiritual development aspects (known as the SPICES) of young people 'so that they may achieve their full potential and as responsible citizens, to improve society'.- that’s what we are all trying but most of all we just want to have fun, mainly out doors in county events.
“These county events mean camping and doing events with other groups with our Errigal County which stretches from Limavady to Derry to Dunfanaghy and Gweedore.”
Mary continued: “The youngsters also learn life skills like first aid and outdoor skills such as hiking, mountaineering, water activities, making bivvies and fire lighting along with friendships and a self belonging that other groups don’t offer.
“We collect hampers for St Vincent De Paul and have collections of toys, clothes and bedding which is then sent out in trailers to war torn countries.
“We also take part in beach clean ups and visiting the elderly and young alike including special needs- we try to get involved with as many groups as we can.
“At present we have approximately 60 youth aged between 6-18 years but if leaders can’t be recruited we will have to refuse to take any more children.
“We need adults to come on board.”
According to dedicated leader Mary, who has been scouting for seven years, being involved with such a hard-working group and getting to know the inspirational youngsters has been very rewarding.
“Being a leader has built my confidence and made me a better person,” explained Mary.
She continued: “It has helped me see the bigger picture and get involved with other groups to help the community.
“We are a happy group and we have great morale - the leaders help each other out and are always willing to lend a hand and always have great ideas to keep the kids going.
“We are really lucky that our leaders are all talented, gifted and happy people who generate good vibes.”
Mary, who had previously been a scout leader in Ballykelly went on to explain: “It is very true you never leave scouting.
“I returned to it as I had spare time- it’s a joke amongst leaders, sure it’s only an hour a week ... never!
“We feel that scouting builds a young person's personality, it encourages independence and children move at their pace, not what is expected in school.
“We try to make as much of our learning out doors when possible and encourage individuality at all times.
“I love scouting simple as.”
Within the unit, youngsters are placed into groups based on their age which are known as Beavers (6-8 years), Cubs (8-11 years) Scouts (11-15 years) and Ventures (15-18 years).
Beaver leader, Neil McIvor told the Northern Constitution: “Being a small part in bringing happiness and memories to a child’s life, whether they remember you for it or not, is all that matters.”
Seven year old Connell Carrick, who joined Beavers last year, said: “It's really fun because I get to meet new friends and it's a great adventure when we go to the woods.
“And I get to stay up later on a school night!”
For those who are willing to become group leaders, an online course (including Child Protection) is required.
“This involves one evening course introduction and one weekend of being a scouter.”
Mary added: “Leaders do have to commit to this weekend and also have to be passed for vetting by Access NI.
“Leaders can choose which age group they would feel most at ease working with and there is no experience needed, just someone who has a few hours free and willing to do the courses and have fun.”
The group are based in Termoncanice playground (the old canteen).
Cubs (8-11 years) take place on a Tuesday evening from 6.30-8pm, Scouts (11-15 years) and Ventures (15-18 years) take place on a Wednesday from 7-9pm and Beavers (6-8 years) on a Thursday evening from 6.30-8pm.
If you are interested in becoming a leader, you can contact Mary on: 07708699473 or by email at: Maryowens@live.co.uk