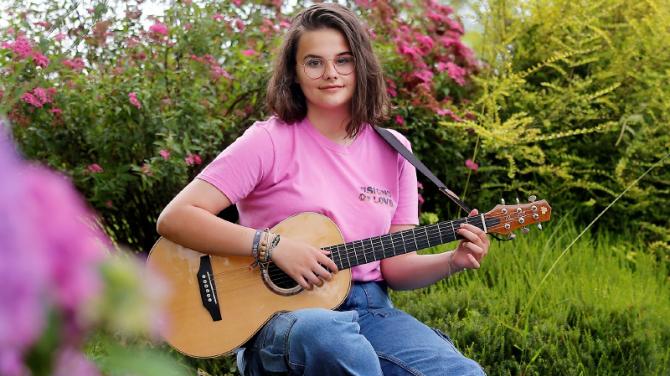 TALENTED Limavady musician, Molly Hogg, is certainly one to watch this year as she prepares to wow the crowd yet again with her stunning vocals at the Multi-award winning, Stendhal Festival.

Ahead of her appearance at the festival on Saturday August 17, the Limavady singer/song-writer, who is currently a pupil at Limavady High School, spoke to the Northern Constitution, discussing her musical inspirations and providing an insight of what to expect from her performance this year.

Tell me about your previous appearances at Stendhal Festival?

Molly: “I have been performing at the festival since I was 9 years old.

“My first appearance took place at the Art Gallery at Stendhal.
”Three years ago I performed at the Henry McCullough stage and just last year I played at the Woodtown stage.

“I love the atmosphere and everything about it, it’s my favourite time of year.”

Have you always had an interest in music?

I have loved music since I was born.

“I got my first guitar when I was seven and my big brother taught me how to play it then my love for music just continued from there.”

How would you describe your own music?

Molly: “I would describe it as a mixture of genres like indie/folk/pop.
”Also, the sort of music I listen to is the polar opposite to the music I play!
”I listen to heavy metal but I would compare my own music to the likes of Passenger, Paolo Nutini, and Ella Fitzgerald, I really like her.”

Who is your biggest inspiration?

Molly: “Well I have been told that my granny, Daisy Hogg, who I unfortunately never got to meet, was a very artsy and musical person so I have always said I would love to be like her one day.”

Have you received much support as a singer/songwriter?

“On Facebook, we released my new music video for my own song called ‘My ladies’ and it received great feedback. “There was so many people saying how much they liked it and people commenting that they can’t wait to see me sing at Stendhal.

“It’s completely surreal for me and it makes me feel really excited about performing again this year.”

Are you feeling prepared for your performance?

Molly said: “I do feel prepared.

“I’m playing all of my own stuff so I am nervous about that but also very excited at the same time.

“This is the first year I’m performing at Stendhal by myself as last year I played with two different people from music club and I have also played with my big brother.

“This year it’s just my guitar and me!

“My guitar is also very special to me.

“It was made by Chris Larkin who was a friend of ours and a very famous guitar maker.
“He passed away 4 months after he gave the guitar to me so it was the last one he ever made.

“For that I feel very privileged and I cannot wait to perform with it.”

As well as making an appearance at Stendhal,Molly will be performing her new hit single,’My Ladies’ on UTV Life this Thursday August 8.