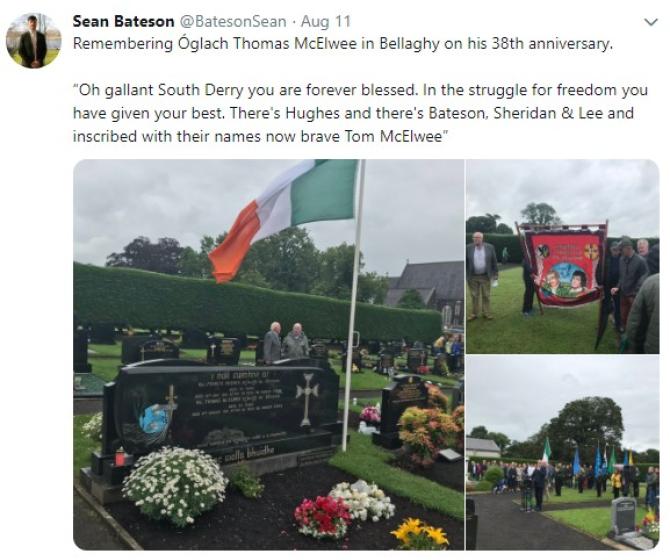 THERE was a furious reaction in Ballymena after the Sinn Fein Mayor of Causeway Coast and Glens praised the IRA man who planted 13 bombs in the town - one of which resulted in the death of a young mother.
Sean Bateson caused outrage when his Twitter post describing Thomas McElwee as 'brave' was circulated widely on social media.
In the post Cllr Bateson said: "Remembering Oglach Thomas McElwee in Bellaghy this morning (August 11) on his 38th anniversary with Gerry Kelly MLA giving the main oration."
He followed up with a quote from the republican anthem 'Farewell to Bellaghy': "Oh gallant South Derry you are forever blessed. In the struggle for freedom you have given your best. There's Hughes and there's Bateson, Sheridan and Lee and inscribed with their names now brave Tom McElwee."
Thomas McElwee (30 November 1957 – 8 August 1981) was an Irish republican who participated in the 1981 hunger strike and was a member of the Provisional IRA.
Alongside his cousin Francis Hughes, he formed an independent republican unit, which for several years carried out ambushes and bomb attacks in neighbouring towns such as Magherafelt, Castledawson, and Maghera.
In October 1976, McElwee took part in a planned bombing blitz on the town of Ballymena.
Along with several others, he was transporting one of the bombs, which exploded prematurely and blinded him in his right eye.
Following his arrest, he was charged and sentenced to 20 years prison for possession of explosives and the murder of 26-year-old mother of three Yvonne Dunlop, who was burnt alive when one of the firebombs destroyed her clothes shop, Alley Katz.
His murder charge was reduced to manslaughter on appeal, although the original jail term stood.
In prison he became involved in the blanket protest. He joined the 1981 Irish hunger strike and died on 8 August 1981 at the age of 23 after 62 days on the strike.
The backlash over Mayor, Sean Bateson's post, began on social media but soon hit mainstream news.
One woman took to Facebook to say: “I remember (that incident) well and the poor girl never stood a chance of getting out. So he was brave? They mush be badly off for heroes if they thank killing someone was brave. The Mayor should be ashamed of himself.”
A grandson of Yvonne Dunlop wrote: “Rip granny Yvonne fly high, you’re always on our mind and forever in our hearts.”
Another relative added: “Our cousin Yvonne, so sad left three young kids for grandfather and grandmother to bring up. These cowards have their ‘reward" awaiting them.”
One of the first local politicians to respond was Bannside TUV Councillor, Timothy Gaston.
He said: “Thomas McElwee was no hero. The Mayor of Causeway Coast and Glens Council has described him as ‘gallant’ but there was nothing brave or heroic about the actions which resulted in McElwee being in the Maze in the first place.
“I think there was a great deal more gallantry displayed by his victim, Yvonne Dunlop.
“Mrs Dunlop was a mother of three who died when McElwee’s IRA gang firebombed Alley Katz boutique in Bridge Street. Her nine-year-old son was able to escape the building because she shouted a warning after checking a shopping bag left by two girls and discovered a bomb. Sadly Yvonne Dunlop did not have a chance to get away before the firebomb exploded.
“It is outrageous that justification of the slaughter of a young mother in the streets of our town is still going on today.
“The rewriting of history while those who bravely faced down terror are subject to prosecution is causing huge anger within the Unionist community.”
Ulster Unionist leader Robin Swann who represents NorthAntrim called for Cllr. Bateson to resign.
“To see a Mayor praise the actions of such a man is yet another example of Sinn Fein mocking and disrespecting innocent victims.
“He has proved he cannot be a Mayor for all the citizens of Causeway Coast & Glens and should step down from the post before he causes any more offence.
“Tom McElwee was many things, but brave was not one of them. We must never forget that Thomas McElwee got to choose the timing and manner of his death, Yvonne Dunlop, like the rest of the IRA’s victims, was given no choice.”
In response to the uproar, Sean Bateson took to Twitter again to assert the right of republicans to remember their dead.
He wrote: ““As a history teacher, a republican and mayor I am fully aware of the different perspectives with regards our past. There never will be a one side fits all narrative of our conflict which is hundreds of years of complexities. It is exactly this understanding which allows m to respect those that hold a Unionist and British interpretation. As a shared and post conflict society, they have a every right to their perspective and to commemorate their dead.
“However, the same applies for myself. My interpretation is from a republican perspective. I attend and will continue to attend commemorations which honour and remember those men and women who I believe died in the cause for Irish freedom. They are held with the utmost dignity and respect.
“The Good Friday Agreement itself enshrines this right to commemorate those who died in conflict. Thus despite agendas from certain quarters, remembering your dead is not something that has to be justified.”