Stendhal going strong for ninth year in a row 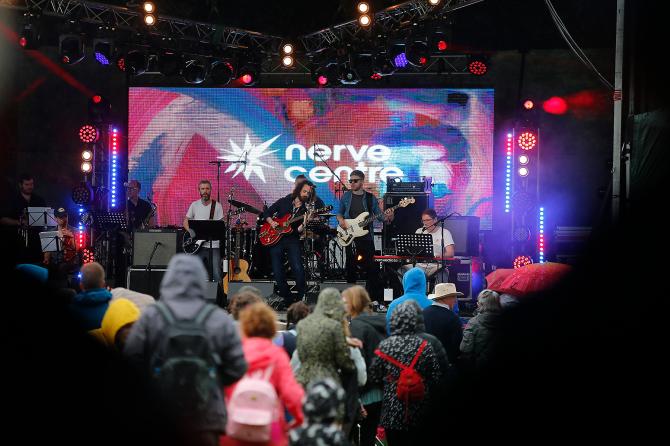 OFTEN it is touted around that there isn't much to do in the Roe Valley area but nothing could have been further from the truth this past weekend as an army of artists and festival goers descended upon Ballymully Cottage Farm for a weekend of colourful, innovative creativity.
The wet weather and mucky conditions could do little to halt visitors' enjoyment of the ninth annual Stendhal Festival.
Swift action was taken with the hard work of volunteers and local farmers to ensure the heavy rain on Friday night didn't affect the annual arts festival.
One of the great pulling factors of the Stendhal Festival is its warm and family friendly atmosphere.
Obvious consideration is put into place to deliver a festival that engages children and adults alike.
There is a designated family tent where there is face painting, art workshops, magicians and singers who deliver a genuine feeling of fun for all involved.
An over riding message throughout the farm is that the festival is environmentally friendly, with a 'No Waste' policy implemented throughout the festival where the use of plastic was limited and reuse and recycling was encouraged.
There was music from the genres of punk, rock, rap and folk along with Stand-Up from Kevin McAleer of Derry Girls and Phil Jupitus from Nevermind The Buzzcocks.
Cherym, a young Punk trio hailing from Derry, showed off their attitude and rebellious style at the Henry McCullough stage on Friday evening.
At the Elixier and Antidote Emcees showcase; Dublin rapper, Costello gave maybe the most energetic performance of the weekend to a packed Wooly Woodland stage where he rapped lyrics of life on the inner city streets of Dublin city.
A highlight of the weekend was Damien Dempsey's charismatic performance at the Karma Valley stage where the crowd were treated to the hits of Apple of My Eye, Rainy Night in Soho and Party On.
Dempsey developed a great rapport with the audience and commented on the leafy surroundings saying that spending his Saturday performing to the like-minded people of Stendhal was “Heaven on Earth.”
Basement Jaxx attracted the largest crowd of the weekend on Saturday night where they delivered their well known tracks of Where's your Head at?, Romeo and Red Alert which allowed the crowd to party and rave into the night under the moonlit sky.
Some great paintings and art works were on show at the Art Gallery where visitors were free to explore.
Ronan has been a volunteer at Stendhal for several years. He said: “Even though the weather was bad, this was maybe the best year that I've had working at the festival.
“There was loads of things to do this year which keeps it interesting for the visitors.
“The organisers treat the volunteers brilliantly. We were always well looked after throughout the whole preparation and throughout the whole weekend.
They really are great people to work alongside.”
The ninth edition of Stendhal has proved to be a great triumph and now the organisers focus will switch towards next year where they will look again to emulate their ever growing success.